The cable car system forms part of the intermodal urban transport network operated by the San Francisco Municipal Railway, or Muni as it is better known. While the cable cars are used to a certain extent by commuters, their low speed, small service area, and premium fares make them primarily a tourist attraction.

There are turntables at the three terminals served by the Powell-Hyde and Powell-Mason lines, and these two lines are served by a common fleet of single-ended cable cars. The California Street line, on the other hand, is served by a separate fleet of double-ended cars and its two terminals are simple single-track stubs.

The cable car system connects at both its terminals on Market Street with the F Market heritage streetcar line. The Taylor and Bay terminal, and the Hyde and Beach terminal, are both short walks from the F Market line.

Cable Car No. 58 traverses the California Street line in December, 2004.

As previously mentioned, there are two fleets of cable cars in San Francisco:

Both types of car ride on a pair of four-wheel trucks. The term California Street car, as in a car running on the California Street line, should not be confused with the term California Car. The latter term applies to all the cars currently operating in San Francisco, and is a historical term distinguishing this style of car from an earlier style where the open grip section and the enclosed section were separate four-wheel cars (known as the grip car and trailer). 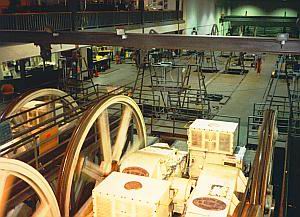 An interior view of the power house.

The car barn is located between Washington and Jackson Streets just uphill of where Mason Street crosses them. Cars reverse into the barn off Jackson Street and run out into Washington Street, coasting downhill for both moves. To ensure that single-ended cars leave facing in the correct direction, the car barn contains a fourth turntable. Cars are moved around the car barn with the assistance of a rubber-tired tractor.

The car barn is situated directly above the power house and the Cable Car Museum. The museum's entrance is at Washington and Mason. It contains several examples of old cable cars, together with smaller exhibits and a shop. Perhaps of more interest are two galleries which allow the visitor to overlook the main power house, and also to descend below the junction of Washington and Mason Streets and see the large cavern where the haulage cables are routed out to the street.

There are four separate cables: one for the California Street line, one each for the separate parts of the Powell-Hyde and Powell-Mason lines, and one for their common section. Each cable is 1 inch (2.5 cm) in diameter, running at a constant speed of 9.5 mph (15.3 km/h), and driven by a 510 horsepower (380 kW) electric motor via a set of self-adjusting sheaves. 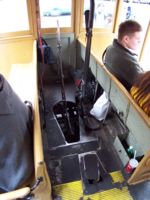 A view of the controls inside Cable Car No. 58.

The driver of a cable car is known as the grip man. This is a highly skilled job, requiring the grip man to release the grip at certain points in order to coast the vehicle over the pulleys or another line, and to anticipate well in order to avoid collisions with other traffic that may not understand the limitations of a cable car. Only a small proportion of people who attempt the training course actually pass it. As of December 2005, there has only been one grip woman.

Besides the grip man, each cable car carries a conductor whose job is to collect fares and manage the boarding and exiting of passengers. With the common practice of carrying standing passengers on the running boards of cable cars, passenger management is an important task.

Prospective cable car crews are screened to ensure that they have a good personality and are suitable for dealing with large numbers of tourists and leaving a good impression of the city, and some crew members are locally well-known personalities. On the second or third Thursday of every July, a cable car bell ringing contest is traditionally held in Union Square between cable car crews.