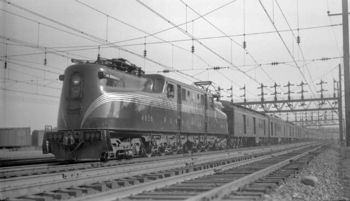 The Pennsylvania Railroad's train No. 173, the Federal Express, cruises through Washington, D.C. on August 3, 1939.

The Federal Express was a named passenger train run by the Pennsylvania Railroad and New York, New Haven and Hartford Railroad between Washington, DC's Union Station and Boston, Massachusetts's South Station. At different times, its route has taken it across the Hudson River via a car float between Port Morris and Jersey City (the ferry Maryland), the Poughkeepsie Bridge, and finally the Pennsylvania Tunnel and Terminal Railroad. The final routing was identical to today's high-speed Northeast Corridor.

On October 18, 1912 the Federal Express (and the Colonial Express) began using the new Pennsylvania Tunnel and Terminal Railroad into New York Penn Station. However, an omnibus transfer was required to get to Grand Central Terminal to continue to Boston, and the next day it was rerouted via the Poughkeepsie Bridge. The route took it along the PRR's Belvidere Delaware Railroad from Trenton, New Jersey to Belvidere, New Jersey, the Lehigh and Hudson River Railway from Belvidere to Maybrook, New York, and the NYNH&H's Central New England Railway across the Poughkeepsie Bridge, Dutchess County Railroad to Hopewell Junction, New York, New York and New England Railroad to Hawleyville, Connecticut, Housatonic Railroad to New Haven, and the normal route the rest of the way to Boston.

Due to freight congestion on the NYNH&H section, the train was discontinued January 9, 1916. With the opening of the New York Connecting Railroad and its Hell Gate Bridge on April 1, 1917, the Federal Express was restored via New York City, running through via the new connection. This final routing was made in 12 hours 10 minutes. 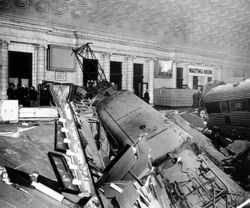 One of the more interesting moments in the history of the Federal Express took place on the morning of January 15 1953 at Washington's Union Station. Due to a brake line cock (valve) that was closed when switching a car out at Baltimore, Maryland, the train (en route from Boston) was unable to apply the brakes on part of the train. Pushed by the unbraked cars, the GG1 engine and two passenger cars ran off the end of Track 16 and crashed through the floor of Union Station and into the baggage room. In a remarkable demonstration of the durability of the GG1 engines, Engine #4876 was later cut into three pieces, removed from the baggage room, and reassembled at the Altoona (PA) shops of the Pennsylvania Railroad. It then re-entered commercial service and went on to be one of the last-serving GG1 engines.