For other uses, see Cavan (disambiguation)

Template:Infobox Irish Place Cavan (An Cabhán in Irish, meaning "the hollow") is the main town and administrative centre of County Cavan in the Republic of Ireland. The town lies in the north midlands of Ireland, close to the border with Northern Ireland. The N3 road connects the town to Dublin. 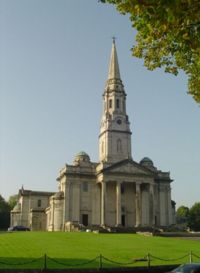 Cathedral of Saints Patrick and Felim

The county has a population of 63,961 (2006 preliminary census data),[1] and covers an area of 730 km². The average density of population is 29.9 persons per km². Cavan is divided into Four County Electoral Areas: Bailieborough, Ballyjamesduff, Belturbet and Cavan. There are three Town Councils: Cavan Town, Belturbet and Cootehill.[2]

This article or section does not cite its references or sources.
Please help improve this article by introducing appropriate citations. (help, get involved!)
This article has been tagged since July 2006.

The O'Reilly family (still a very common surname in the area) established a castle in the town in the late 13th century. A Franciscan monastery was also established at around the same time. In the 15th century the local ruler, Bearded Owen O'Reilly, set up a market which attracted merchants from Dublin and Drogheda. King James I of England granted the town a charter in 1610. In the early 19th century the Maxwells, Lords Farnham of Cromwellian origin, built a new wide street, that still bears the name Farnham Street. This was lined with comfortable town houses, public buildings (such as the Court house which dates from 1825) and churches.

In the late 19th century Cavan became an important rail junction between the midland and western lines and those of the Northern Railways. The Town Hall was built in 1909. In 1938 work began on the Roman Catholic Cathedral of Saints Patrick and Felim. Three miles west of Cavan town is the Anglican Kilmore Cathedral, which contains a Romanesque doorway dating from the 12th century. Farnham House to the northwest of Cavan town is one of the largest houses in Co. Cavan. It is believed to have been built for the Maxwell family in 1810 and designed by Francis Johnston a Dublin architect. It was recently sold by the widowed Lady Farnham to a local entrepreneur and the house and estate is now converted to a luxury hotel and leisure complex under the Radisson SAS interenational hotel group.

==Industry/Commerce==Cavan has a very successful track record in manufacturing industry, includes the Kingspan building insulation group at Kingscourt, Sean Quinn's Quinn Group of companies located nr. Ballyconnell and Cavan town, Lakeland Dairies in Killeshandra and Bailieboro, Liffey Meats in Ballyjamesduff as well as Glanbia the producers of cream for the world famous Baileys Irish Cream liqueur at Virginia. The county has also been successful in attracting international manufacturing with Wellman International, Abbott Laboratories and Pauwels Trafo all with operations in County Cavan.

Cavan town was made a development hub under the National Spatial Strategy in 2004. This should further encourage investment in the area over the coming years.

The local newspapers are the Anglo-Celt and Cavan Echo.

There are about 30,000 people living within a 10 mile radius of the town, so top infrastructure is very important. The town is located on the junction of two national routes, to Dublin and Belfast. The National Development Plan 2000 - 2006 provides for a major upgrading of the N3 route with a proposed dual carriageway from Kells to Dublin and high quality single carriageway from Kells to Cavan which will also eventually bypass Virginia. The N3 bypass around Cavan town was fully completed in March 2006, eliminating the need for heavy traffic to enter the congested town altogether. One major problem for the town is that there is not a rail service.

Cavan used to have two railway stations (GNR and CIÉ) on the end-on junction of the Belfast/Cavan and the Cavan/Dublin via Inny Junction lines. A branch of the Cavan & Leitrim Railway (3' gauge) was also indirectly linked to Cavan town via Belturbet (the C&L terminus) and Ballyhaise on the GNR line. When the Stormont Government closed the section of the Belfast line from Portadown to Glaslough in 1957, it was found to be uneconomical to keep running the rump section from Monaghan to Cavan. All these lines (including the Cavan & Leitrim Rly) were closed by 1960. The Virginia Road Station also once serviced the route between Kells and Oldcastle.

Education in Cavan town is co-ordinated by the Cavan Vocational Educational Committee. The town has three second-level schools, St. Patrick's College, Loreto College, and Cavan Vocational School, and the town is served by a third level college - Cavan Institute (formally Cavan College of Further Studies) which has been in Cavan since 1985 and is the largest provider of FETAC courses in the North East region.