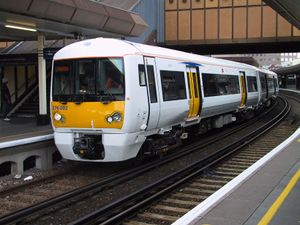 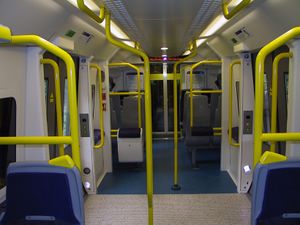 Interior of a Class 376 at Bromley North

The Class 376 Suburban Electrostar is an electric multiple-unit passenger train manufactured by Bombardier Transportation. It is part of the Electrostar family, which are the most common EMUs introduced since the privatisation of British Rail.

It is a derivative of the Class 375 Electrostar designed specifically for use on the high-volume metro routes around London, England operated by Southeastern. The changes are mostly focussed on increasing the trains’ capacity and decreasing the time they must spend stopped in station. The Class 376's doors are wider to allow more passengers to board at once, and are metro-style sliding doors which are faster and more reliable than the Class 375’s plug doors, although they do not provide as much insulation for heating and cooling purposes. In order to provide more standing room, the trains also have fewer seats, more handrails, and no on-board toilets (South Eastern have promised to provide additional facilities in their stations to compensate).

Class 376 units are five carriages long, and unlike the Class 375, have full-width cabs instead of gangways at the ends of the train; it is therefore not possible to walk between two coupled Class 376 units. The cab front is also smooth and ‘step free’ to reduce the problem of ‘train surfing’ in South London.

Like all new trains in the United Kingdom using third-rail power, one carriage in each unit has a recess in its roof where a pantograph could be fitted, so as to allow for future conversion to overhead AC power.

Although all units are DC only, the class is numbered in the 3xx series normally used for AC units.

For the new London Overground which will begin operating in 2007, Transport for London has ordered Class 378[citation needed] (modified Class 376) units which will replace the British Rail Class 313 units and the East London Line A60 and A62 stock. The new units are expected to be delivered for the opening of the extended East London Line in 2010.