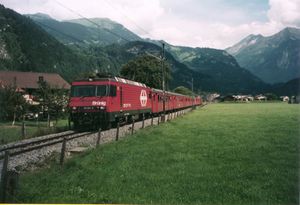 The Brünigbahn encompasses the line from Interlaken via Brienz, Meiringen, the Brünigpass, Giswil and Alpnachstad to Lucerne. Track gauge is 1 m (3 ft 33⁄8 in).

The line was constructed by the Jura-Berne-Luzern-Bahn (JBL), which opened the section between Brienz over the Bruenigpass to Alpnachstad in 1888. Initially, the line only provided a connection with steamships on Lake Brienz and Lake Lucerne. In 1889, the Alpnachstad - Lucerne line was opened. With the transfer of JBL to SBB in 1903, year-round operation was introduced. Only in 1914 did the last section between Brienz and Interlaken follow. Electrification took place in 1941 and 1942.

Brünigbahn, LSE, BOB and MIB tracks are connected, although the latter two use different current systems, so locomotives cannot be shared unless specially equipped. The technology of being able to run electric locomotives or EMU's under different voltages and frequencies and/or under AC or DC has existed for some time now. See Multisystem locomotives.