The Tyne and Wear Metro (known simply as the Metro) is a light rail metro system based around Newcastle upon Tyne and Sunderland, in the county of Tyne and Wear in North East England. It opened in 1980, and in 2005-6 provided 36.6 million journeys on its 77 km route.[1] It is operated by Nexus, previously known as the Tyne and Wear Passenger Transport Executive (TWPTE). Nexus also operate a passenger ferry service at the mouth of the River Tyne between North Shields and South Shields, and several bus services around the Tyne and Wear area. 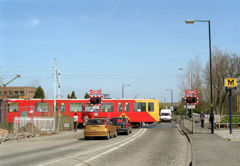 The Metro began operating in 1980, but was an evolutionary development, as it was a pioneering system in the use of existing rights-of-way to create a modern rail transit system, linking them with purpose-built tunnels under central Newcastle and Gateshead. Much of the Metro's route was part of one of the world's first electric urban railway systems, which opened in 1904 on passenger lines that were then already well established (see Tyneside Electrics). The Metro alignment comprises most of two of the world's oldest passenger railways, the Newcastle & North Shields Railway (Metro between Chillingham Road and North Shields) and the Brandling Junction Railway (between Gateshead and Monkwearmouth, near Stadium of Light), both opened in 1839, making the Metro arguably one of the world's oldest local rail transport systems. In the case of Metro's Chichester station, the route of an existing mineral railway was chosen instead of the previous passenger railway alignment, as it passed through a more heavily populated area than the previous High Shields station. This is also the oldest section of the Metro route, dating back to 1834. 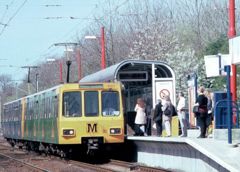 With the opening of the Sunderland extension in 2002, the Metro became the first UK system to implement the Karlsruhe model, using track shared with mainline trains on the section between Pelaw and Sunderland. The section from Sunderland to South Hylton was previously part of the Sunderland to Durham mainline, closed in the wake of the Beeching Axe in the 1960s, and was the second Metro segment to be built on a completely disused line, following on from the Newcastle International Airport extension, which was largely built on the former Ponteland branch line.

When the Metro first opened, it was claimed to be part of the UK's first integrated public transport system. The Metro was intended to cover trunk journeys, while buses were reoriented toward shorter local trips, tightly integrated with the Metro schedule, to bring passengers to and from the Metro stations, using unified ticketing. Much was made of the Metro's interchange stations such as Four Lane Ends and Regent Centre, which combined a large parking facility with a bus hub and Metro station; this distinction is no longer emphasized. Some passengers complained that the Metro integration was pursued overzealously, and for example, bus passengers to Newcastle would be forced to change to the Metro in Gateshead for a short trip, rather than have the bus route continue for a short distance further into Newcastle. Integration lasted until deregulation of bus routes in 1986. However, it is still possible to buy Transfare tickets which combine a Metro and bus journey.

The Metro has drawn criticism from environmental campaigners as it does not permit the carriage of standard bicycles, though there are now storage lockers for these at many stations. Only small folding bicycles are permitted.

The Metro long had a problem with fare-dodging on the system, due to the lack of inspectors on the trains. In recent years, the number of ticket inspectors has increased, and in 2005 the penalty fare for travelling without a valid ticket was increased from £10 to £20.

The "Stand clear of the doors please" announcement, which sounded before the doors started to close, was introduced in 1991. In 1996, a contest was held in which several mystery celebrities recorded the phrase, with a prize awarded for correct identification; these recordings were replaced by staff announcements after the contest ended. The phrase was replaced with "Doors closing" in 2004. 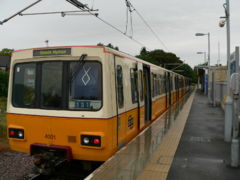 The prototype Metro car, 4001, has been restored to its original livery (seen here at South Hylton in 2005).

The Metrocars owe much to similar German Stadtbahn vehicles, although they were built by Metro-Cammell in Birmingham (now part of Alstom). Prior to opening, the Metro's two prototypes (numbered 4001 and 4002; they are still in service) underwent several years of testing at the Metro's own test track on North Tyneside, opened in 1975. The track was also used to test cars for the Hong Kong MTR, also built by Metro-Cammell. However, to accommodate the larger size of the Hong Kong cars, a short above ground test tunnel had to be demolished. The test track was built on the route of an old mineral wagonway, and it is now home to the Stephenson Railway Museum.

The Metro uses the line voltage of 1500 V DC, which was previously used on the Woodhead Line but is now unique in Britain. Metro has a rated top speed of 80 km/h, which it attains on the rural stretches of the line. The vehicles have a minimum turning radius of 50 m, although there are no curves this tight on the system.

During the early years of Metro, cars were operated in single and double sets. As single set cars became overcrowded Nexus, operator of the system, resumed using two cars as standard. Single sets are used today, to operate the new Sunday service. Single cars became common during construction of the Sunderland extension when some units were taken for testing of the new track.

As from the 14th January 2007, single car services operate on Sundays.

A schematic map of the Tyne and Wear Metro system.

Originally there was also a Red line that ran between Pelaw and Benton, and a Blue line that ran between St James and North Shields. Additional trains ran on these lines during peak hours to increase the service frequency at the busier stations; they also made sense in the context of the extensions that were mooted at the time the Metro was opened. Many of these additional services still operate today, but are now considered Yellow line services.

Before December 11, 2005 the Yellow line was a route that ran from South Hylton to St James and the Green route ran from South Shields to Airport but this was changed to accommodate a new timetable system. The routing shown above was introduced due to lower than expected passenger numbers on some parts of the Sunderland extension, as well as to streamline operations on the section shared with National Rail trains; as the shared section is now part of the shorter Green line, it is expected that delays along that section by mainline trains will have less overall effect on Metro scheduling. 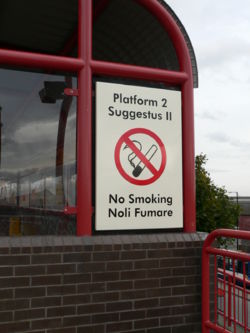 Wallsend station is probably the only station in Britain with signs in Latin. 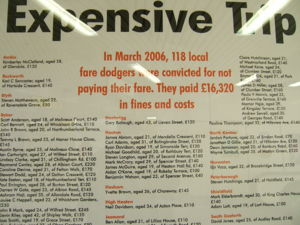 The system opened in stages:

Since the opening of the Sunderland extension, Nexus found that the standard of service across the Metro network fell. This was mainly due to Network Rail stipulations requiring metro services to be timetabled at least three minutes apart from the mainline trains at Pelaw and Sunderland. The stipulations mean that it is difficult for Metro services to run to a regular timetable.

The patronage on the section of the route between University and South Hylton has failed to meet targets. In 2004–5 less than half the passengers predicted to use the service between these two points did so. In addition, passenger numbers have fallen on this section since 2003–4. This has led Nexus to introduce a 50% reduction in services between University and South Hylton, again effective from December 2005. One possible reason for the lack of patronage is that there are only four stations outside of the city centre, and thus the vast majority of people who live in Sunderland would have to first take a bus to the centre of South Hylton, then a metro or train.

From the beginning, the Metro system employed a distinctive design and corporate identity, in part to distinguish itself from the decrepit rail system it replaced, but also to match the livery of the bus system then in use. The Calvert typeface, used for signage and in printed materials, was designed specifically for the Metro by Margaret Calvert (see [3]). The corporate identity was revised in 1998, de-emphasizing the Calvert font, and adding the word Metro to its M logo.

The Metro fleet was initially painted in a two-tone livery of cadmium yellow and white that matched the Metro station design of the time, as well as the livery of the Tyne and Wear bus fleet until 1986. In the mid-1990s a new colour scheme was introduced, with Metrocars painted solid red, green, or blue, with a yellow wedge at each end and yellow triangles on the doors. This scheme was modified slightly in 2005, in part to comply with safety regulations (the doors are now solid yellow).

In addition, many Metrocars have carried full-body advertising. The initial prototype, number 4001, has been repainted in its initial yellow-and-beige livery from 1975. 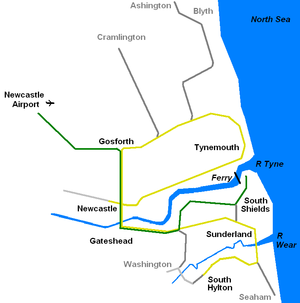 The system's newest station, Northumberland Park, opened on December 11, 2005. It serves a new housing development between Shiremoor and the A19 Holystone Interchange, and is located adjacent to existing track between Palmersville and Shiremoor on the northern loop section of the yellow line. It also acts as a feeder station for Nexus' R19 bus service, supporting Cobalt Park business park, the Silverlink retail park, and North Shields.

A further infill station at Simonside, between Bede and Tyne Dock, has been planned for many years, and is scheduled to open in 2007.

Further plans call for Haymarket station in Newcastle city centre to be renovated as part of an overall improvement of the site; it will include leisure and retail facilities.

There have been many suggestions for further Metro extensions, but none of these are likely to be built in the near future. There are several reason for this. The Metrocars will need to be replaced by around 2015. The Sunderland extension was built without requiring any new trains, but any significant new extension would require new rolling stock.

In 2002 Nexus unveiled Project Orpheus, an expansion plan that would extend the Metro system by adding new sections using street running, thus changing the Metro into a high-end tram system. Nexus argued that this would provide a cost-effective way to introduce rail service to parts of Tyne and Wear the current Metro did not reach. The plan listed a number of routes, not all of which were to be built as rail lines; transitional bus services were envisioned that could be replaced by trams as demand increased.

However, the original Project Orpheus has been abandoned, possibly because of the government's present "value-for-money" policies for public transport. This increased scrutiny has affected expansion plans for other light-rail systems such as Manchester Metrolink, where an expansion scheme was halted even after construction had begun. Critics have said that government policies now overtly favour bus schemes. A Metro link to Washington failed to gain government backing, despite the existence of substantial railway rights of way to both Pelaw and Sunderland; preliminary support was offered only to a guided bus scheme.

Another project, to remove the last section of single track in the Metro system, between Pelaw and Bede, would cost around 12 million pounds, and would allow freight trains to use the Metro infrastructure. Again, the government has expressed doubts as to whether it considers this would be cost-effective. This however is included in a revised Project Orpheus. Along with the improvements to the current system, a Tyne and Wear Metro improvement and regeneration project is currently proposed with plans outlined in the following document. http://www.nexus.org.uk/wps/wcm/resources/file/eb95cc420317607/Project%20Orpheus.pdf

As of 2005, there has been discussion of a public-private partnership to raise the funds necessary to modernize the Metro system.

Among extensions proposed at various times, none of which is currently being considered, are: