Train of the Year

The Train of the Year Award is jointly run by TrainSpottingWorld and Transport Centre (www.transportcentre.co.uk).

Train of the Year was set up in 2007 to recognise Trains, Locomotives, Multiple Units etc that have done something memorable during the year. For example, a nominee could be a vehicle that has had an unusual repaint, returned to service after a long absence, has been preserved, or anything else!

The 2008 award will begin with the nominations stage. Please send any nominations to toty_noms@yahoo.com, and they will be put into a pool. In October, we will pick 5 of the nominations and then you can vote for them! The Winner will be announced in January 2009.

The winner of the 2007 Train of the Year award was British Rail Class 101 Railcar No. E51188, based at the Ecclesbourne Valley Railway, Wirksworth. Below is an image of the railcar being "presented" with it's certificate. 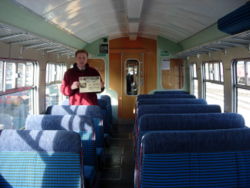 2007 was the first year the award was started. More can be found above!

Tram of the Year