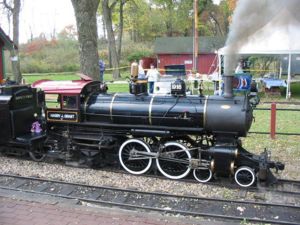 The railroad was started in Janesville, Wisconsin, as a demonstration railroad for Sandley locomotives. In 1952 the Sandleys were forced from Riverside Park, where they were running. Elmer and Norman (father and son) Sandley relocated to the former right-of-way of the Milwaukee and Lacrosse Railroad, which was abandoned in favor of a route with a smoother grade 500 feet (152 m) to the west.

The Sandleys built their factory, a replica and C&NW depot (scaled down), and a train line to demonstrate their products. They built about 15 locomotives and over 30 pieces of rolling stock. Trains that once ran at the Brookfield Zoo in Chicago and the Knoxville Zoo were produced at the Dells facility. The locomotives and rolling stock currently running at the Milwaukee Zoo were made here as well.

In the early 1980s, new locomotive and rolling stock orders dropped off and Norman was forced into bankruptcy. The train ride closed as well. In the early 1990s a group of enthusiasts began working to purchase the property. The Preservation Group was formed, and members began replacing ties and repairing buildings, but they still had to find a train. One of the groups members had built a diesel locomotive and this was traded to the Milwaukee Zoo for the #82 steam locomotive, which had not been running as was on display. #82 is still owned by the society. The society has since acquired another steam locomotive, the #98, from the Old Waukarusa Railroad in Indiana. Both locomotives were built at the Wisconsin Dells shop facility in the 1950s, with #98 being originally the motive power for the Hoot, Toot & Whistle Miniature Steam Railway near Elgin, IL.

Construction photographs of #98 can be found in the long-out-of-print "Little Railways of The World" by Frederick Shaw.

The railroad now features an extensive Gift Shop including Thomas & Friends merchandise, an operational Joinery building where coaches are restored and maintained, and a small picnic area. Plans to include self-guided tours of the shop areas and roundhouse facilities are being developed.

The tracks ending at "Riverside Canyon".

On June 11 2004, the railway's mainline was severed by a washout. Railway operations since the washout terminate just short of the site and trains are stopped near the canyon's edge so passengers can get a closer look. A bridge has been constructed across the washout area, and is now in service. Trackwork is still being conducted but trains are now able to make the full trip to Western Springs once again. A new yard area will allow for a turntable.