The former Victorian Railways, the state railway authority in Victoria, Australia built a number of experimental narrow-gauge railway lines around the beginning of the 20th century. Although all were closed by the early 1960s, parts of two have been reopened as heritage railways. 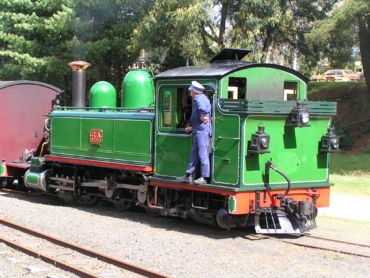 NA class loco preserved in the original green livery used b the Victorian Railways until 1902.

A depression in the early 1890s brought a halt to the rapid expansion of railways in Victoria. Politicians promoted narrow gauge lines as a way to link remote communities, particularly in hilly country, without the expense of the 5' 3" (1600 mm) broad gauge railways. Railways officials opposed them, citing the inconvenience and expense of a break-of-gauge. A parliamentary committee eventually identified 14 possible locations for narrow gauge railways, and recommended that four experimental lines be built. They were:

The Warburton line was built in broad gauge, however authority was given for the construction of the other three lines. Subsequently, a further two lines were built, the Moe to Walhalla line, and an extension from Beech Forest to Crowes. At various times other lines and extensions were proposed, but none came to anything.

None of the lines constructed ever made a profit. Freight rates were the same for broad and narrow gauge railways, despite higher direct costs. Most of the loadings were goods such as timber, potatoes and lime, which were charged at a low rate. Most freight was outbound, so many trains travelled towards the terminals almost empty. And despite originating the traffic, the lines were only credited with a portion of the freight charge. The amount credited to the lines did not cover the cost of running trains, and the more traffic the larger the loss. However, particularly in the 1920s, the traffic generated by the narrow gauge lines was appreciated by the railways and the lines survived for up to 60 years before closure.

Right of way and safeworking

A number of studies were made of overseas narrow-gauge railways such as the Darjeeling Himalayan Railway in India and the Ffestiniog railway in Wales. An initial decision to build the lines in 2' (610 mm) gauge was changed to 2' 6" (762 mm) gauge for the Victorian lines. This gauge was being adopted on other lines in the British Empire at this time, such as the Kalka-Shimla Railway and the Sierra Leone Government Railway. The railways were constructed using 60 lb/yd rail, initially obtained from broad gauge lines that were being upgraded. A maximum grade of 1 in 30 was adopted, while the minimum radius of curves was 2 chains (132 ft, or 40.6 metres).

Apart from a couple of experiments with other systems, all lines were operated by the Staff and Ticket method of safeworking, as per standard Victorian Railways practice for this system.

Apart from light maintenance that could be done locally, the locomotives and rollingstock were maintained at the Victorian Railways' Newport Workshops in the suburbs of Melbourne, requiring the transport of the vehicles by broad-gauge flat wagons. The locomotives and other vehicles would be moved around the various narrow-gauge lines as appropriate, so that in most cases, no equipment was dedicated to particular lines.

The trains were all fitted with Westinghouse air brakes and, originally, with chopper couplers. In the mid 1920s the couplers were replaced with small 'knuckle' couplers. 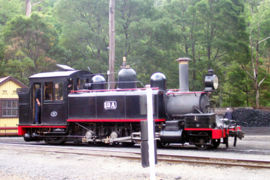 NA locomotive No. 12 at Belgrave on the Puffing Billy Railway.

Baldwin Locomotive Works in the United States supplied the first two 2-6-2 tank locomotives, as well as parts for a further two locos. One each of the supplied locos and the parts kits was a simple loco, and the other a compound. The new class was classed "A", however confusion with the broad gauge A, AA and A2 classes lead to the prefex "n" being applied to written records, making it the nA class. The Victorian Railways Newport workshops assembled the parts to give an additional two locos, and subsequently built a further 13 of the simple cylinder version. The last one, number 17, was built in 1915.

By the mid 1920s, traffic was growing with up to 7 trains a day on the Beech Forest line. To decrease train mileage and therefore costs, two Garratt locomotives were purchased from Beyer-Peacock in England. Weighing 69 tons, these 2-6-0+0-6-2 locomotives produce a tractive effort of 26,860 lbf, making them among the most powerful steam locomotives ever built for 2'6" gauge. They were designated as the "G" class and given the numbers 41 and 42, and entered service in 1926. G41 spent its entire life on the Crowes line, whilst G42 was originally allocated to the Walhalla line, then transferred to the Crowes line, and is currently running on the Puffing Billy Railway. G41 was scrapped. 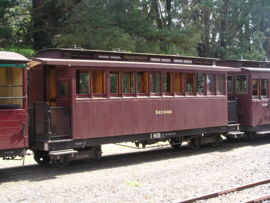 A range of passenger and goods vehicles were also built at Newport or by contractors. While most Victorian Railways broad gauge goods vehicles of the time were 4 wheel wagons, all the narrow gauge rolling stock were bogie vehicles and most were built on a standard underframe.

The initial stock were all built on a 25' long underframe, with the coaches being the open saloon type with balconies for end loading. Various vans were supplied together with stock cars, but the predominant goods vehicle was the NQR class open truck, of which 217 were eventually supplied. Later some 32' side opening coaches were built to cope with increasing traffic. A number of simple open-sided coaches were also provided for excursion traffic on the Gembrook line.

The first line, from Wangaratta to Whitfield, was unlike the other lines in that it was built through mostly flat, open, agricultural country, following the King River. The 30.5 mile (49 kilometre) line was built as a narrow-gauge line because it was thought that it might be extended into the mountainous country to the south, but this extension never eventuated. The line was opened in March 1899, and was the first line to close, in October 1953. The line relied mostly on local agricultural traffic, and opened with a daily mixed train. By the 1930s this had been reduced to a weekly goods service, and stayed at this level until the railway closed. There was only one lineside industry, a dairy at Moyhu, and the majority of stations were nameboards at road crossings.

The 18 mile (29 kilometre) Gembrook line opened in December 1900, through the southern foothills of the Dandenong Ranges just east of Melbourne. It was closed in 1954 following a landslide between Selby and Menzies Creek, but continued to operate tourist services for the Puffing Billy Preservation Society over the remaining usable section of the line to Belgrave. However, this came to an end in 1958 when the line was closed to allow conversion to a broad-gauge electric line as an extension of the suburban railway system of Melbourne. Through the efforts of the Puffing Billy Preservation Society, the landslide was bypassed and the remainder of the line from Belgrave to Gembrook has been restored and operates daily for tourists. The railway is now administered by the Emerald Tourist Railway Board.

The Gembrook line always had a higher passenger loading than the other lines. The junction station of Upper Ferntree Gully was a terminus for the Melbourne suburban rail system, so the line was popular with weekend visitors from Melbourne. Fifteen special excursion coaches classed NBH were built to cater for this traffic. Travelling through a region with rich soils and high rainfall, agricultural products such as potatoes formed much of the freight traffic. Nobelius Nurseries over the years dispatched thousands of fruit trees from a packing shed located on Nobelius siding, between Emerald and Nobelius stations. Sawn timber was also important, and sidings were located at Gembrook to serve several private 3' (914 mm) and 3' 6" (1067 mm) gauge tramways that brought timber down from further up the mountains.

Colac to Beech Forest and Crowes

The third line to open was in the Otway Ranges in south-east Victoria. The line from Colac to Beech Forest opened in March 1902, and it was extended to Crowes in June 1911. Nearly 44 miles (73 km) long, this was the longest of the narrow gauge lines. It was also the last to close, finally succumbing in June 1962, although the line had been truncated in 1954.

Both the Colac and Crowes lines entered Beech Forest yard from the same end, creating a junction. Trains had to be turned to run down the Crowes branch and a balloon loop was provided at the other end of the yard. A tennis court occupied the land within the loop. Crowes, the terminus of the line, was the most southerly railway station on the Australian mainland.

The primary traffic was sawn timber and firewood, with many sawmills located adjacent to the railway, or accessed by short tramways. Seasonally heavy potato traffic and a lime kiln added to revenue. Traffic grew to require up to 7 trains a day each way by the mid 1920s. The introduction of the Garratt allowed a new timetable with two trains each way between Colac and Beech Forest, and a third train each way to Gellibrand. The Crowes branch saw a single mixed train daily. The arrival of the Great Depression and competition from motor vehicles saw traffic decline to a point where only one train each way operated over the line three days a week. Increased wartime loadings saw traffic increase to two trains each way daily, however this improvement was only temporary. By the time the railway closed, the timetable listed only one train each way a week, and most of the traffic was pulpwood.

The last of the narrow gauge lines to open was the 26 mile (42 kilometre) line to the gold mining town of Walhalla, in 1910. Walhalla had a history of gold mining dating back to the 1870s, and was one of the largest towns in Gippsland. Local residents had long lobbied for a railway, as all goods had to be brought in by bullock cart over rough terrain. However, the gold mine in Walhalla closed in 1914, and the town quickly fell into steep decline. It was reputed that the major source of traffic from Walhalla were the houses of residents leaving the town.

The line did pick up significant traffic from sawmills in the area, some of which had their own sidings. A connection was made with the Tyers Valley Tramway at Collins siding, between Watson and Erica. While the tramway used the same gauge as the railway, there was no physical connection, timber being transhipped by hand. A temporary connection had to be put in place to move locomotives to and from the tramway. A small copper mine and two lime kilns near Platina provided additional traffic. A series of "Back to Walhalla" days in the 1930s caused the railways to put on special passenger trains for these occasions, and such was the demand some were double-headed.

The line was truncated to Platina in 1944 then to Erica in 1952, before finally closing in 1954. The section of the line from Thomson to Walhalla has been rebuilt and now operates as the Walhalla Goldfields Railway.

Unlike the other lines, the 3 mile (5 kilometre) line connecting Welshpool and Port Welshpool was operated as a horse-drawn tramway, and had very little in common with the other lines. This line, also known as the Welshpool Jetty line, was opened in 1905 and closed in 1941.