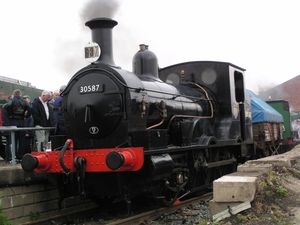 One of the two preserved locomotives, 30587

The London and South Western Railway (LSWR) 0298 Class or Beattie Well Tank is a class of steam locomotive. They are 2-4-0 well tanks.

Originally built in 1873 to a design by Joseph Hamilton Beattie and extensively rebuilt, they remained in service because of the sharp curves of the Bodmin and Wadebridge Railway, one of the earliest railways in Cornwall and previously isolated from the main network, were incapable of being navigated by anything else. BR Classified them under the power code 0P. They were finally withdrawn in 1962 and replaced by GWR 1366 Class 0-6-0PT dock tanks.