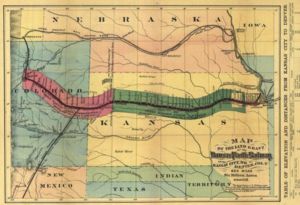 The Kansas Pacific main line shown on an 1869 map. The thickened portion along the line indicates the extent of the land grants available to settlers. At the time of the map, the line extended only as western Kansas (section in green). The extension to the Colorado Territory (section in red) was completed the following year

The Kansas Pacific Railway (KP) was a historic railroad company that operated in the western United States in the late 19th century. It was a federally chartered railroad, backed with government land grants. It operated many of the first long-distance lines in the state of Kansas in the 1870s, extending the national railway network westward across that state and into Colorado. Its main line furnished a principal transportation route that opened up settlement of the central Great Plains, and its link from Kansas City to Denver actually provided the last link in the coast-to-coast railway network in 1870. The railroad was consolidated with the Union Pacific in 1880, but its mainline continues to be an integral part of the Union Pacific network today.

The Kansas Pacific began in 1855 as the Leavenworth, Pawnee and Western Railroad, and was later reorganized in 1863 as the Union Pacific Eastern Division. The UP Eastern was authorized by the United States Congress as part of the Pacific Railway Act, in order to create a second southerly branch of the transcontinental railroad, alongside the Union Pacific. The name "Kansas Pacific" was not adopted until 1869. The original intent of the railroad was to build a line west from Kansas City, Kansas across Kansas to Fort Riley, then north to join the Union Pacific main line at Fort Kearny in Nebraska. The construction of the line was motivated in part was a desire of the U.S. government to extend transportation routes into Kansas, which had been the scene of ongoing conflict between Union and Confederate sympathizers even prior to the start of the American Civil War. See Bleeding Kansas.

The company began construction on its main line westward from Kansas City in September 1863. In 1864 the first 40 mi (64 km) of the line to Lawrence was in operation. In the fall of 1866, the line had reached Junction City, which became the end of the first division of the railroad and where a roundhouse was constructed. In 1867 the line reached to Salina. In March 1869 the name was changed by Act of the United States Congress to the Kansas Pacific. As in the case with the Union Pacific, the Pacific Railway Act authorized large land grants to the railroad along its mainline. Such grants were to be distributed to homesteaders who would populate the lands near the railroad, forming new towns and providing the economic activity needed to support the railroad itself.

Although the railroad had intented originally to build only as far west as Fort Riley, citizens in Denver in the Colorado Territory, eager to be connected to national network, lobbied furiously to extend the Union Pacific lines to reach their city. In 1868, the U.S. Congress enacted a law that was signed by President Andrew Johnson to build a second-phase extension of the line to the Rocky Mountains, with the intention of continuing past Denver through the Rocky Mountains to the Pacific, to compete with the Union Pacific main line. No funds were granted for the construction, however, a situation made more dire by the general collapse in railroad investments following the end of the American Civil War. With the backing of German investors, the railroad began construction on the Colorado extension in October 1869. By March 1870, the line had reached Kit Carson, Colorado. At the same time, the company began building east from Denver. In August the two branches met at on the Colorado Eastern Plains at Commanche Crossing, which was renamed Strasburg in honor of an engineer of the Kansas Pacific.

The arrival of the first trains to Denver in August was two months after the completion in June of the Denver Pacific Railway mainlline linking Denver with the Union Pacific at Cheyenne in the Dakota Territory. The Kansas Pacific and Denver Pacific lines intersected at "Jersey Junction" approximately three miles north of downtown Denver. The Strasburg "joining of the rails" of the Kansas Pacific in August actually marked the true completion of a coast-to-coast railway network in the United States. The Golden spike event in Utah the previous year had marked the linking of the Union Pacific with the Central Pacific Railroad, but until 1872, passengers on the Union Pacific were required to disembark between Council Bluffs, Iowa and Omaha, Nebraska to cross the Missouri River by boat.

In 1874, Union Pacific investor Jay Gould gained effective control of the Kansas Pacific. In 1880, at Gould's direction, the railroad was consolidated with Union Pacific and the Denver Pacific, with the new railroad taking the Union Pacific name. The new company's intention to extend the old Kansas Pacific mainline through the Rockies was strengthened by renewed competition by its archival, the Chicago, Burlington and Quincy. In the early 1880s, the Union Pacific sent surveyors on several expeditions up the Platte Canyon and the Poudre Canyon. When the Burlington withdrew its plans for its own transcontinental line, however, the Union Pacific lost interest in extending a line west from Denver. It was not until the 1934, with the completion of the Denver and Rio Grande Western mainline, that the rail network west from Denver would cross the Rockies and reach Salt Lake City .

The struggle to build the railway against the backdrop of the American Civil War was depicted in the 1953 western movie Kansas Pacific, starring Sterling Hayden and Eve Miller.