The Jungfraubahn (JB) is an 1 m (3 ft 33⁄8 in) gauge rack railway electrified at 3-phase 1,125 volts, which runs 9 kilometres from Kleine Scheidegg to the highest railway station in Europe at Jungfraujoch. The railway runs almost entirely within a tunnel built into the Eiger and Mönch mountains and contains two stations in the middle of the tunnel, where passengers can disembark to observe the neighbouring mountains through windows built into the mountainside.

The Schreckhorn dominates the view from the window at the Eismeer station. One of two stations in the tunnel on the way to the Jungfraujoch 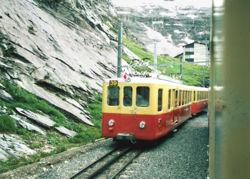 A Jungfraubahn train as seen from the other train as the two trains pass. 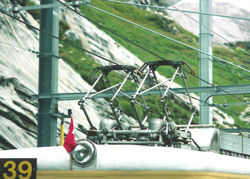 The Jungfraubahn is energised at 1125v using a three-phase ac system which requires the trains to collect power from twin overhead wires, using two pantographs, as seen here.

The JB is under the management of the Jungfraubahn Holding company, which also comprises the Wengener Alp Bahn (WAB) which links to the JB at Kleine Scheidegg and has two routes down the mountain, to Lauterbrunnen and Grindelwald, from where the Berner Oberland Bahn (BOB) connects to the Federal Railways at Interlaken.

Starting from approximately 1860 there were many different plans for a mountain railway on the Jungfrau, which failed due to financial problems. In 1894, the industrialist Adolf Guyer-Zeller received a concession for a rack railway, which began from the railway station of the Wengernalpbahn (WAB) at Kleine Scheidegg, with a long tunnel through the Eiger and Mönch up to the summit of the Jungfrau. In 1896 construction began. The construction work preceded briskly. In 1898 the Jungfraubahn opened as far as the Eigergletscher station, at the foot of the Eiger. But it wasn't until February 21, 1912, sixteen years after works commenced, when the tunneling crew finally broke through the glacier in Jungfraujoch. The station at Jungfraujoch was inaugurated on August 1, 1912.

Since most of the railway is inside a tunnel, it was designed to run with electricity since conception. The latest rolling stock consists of twin units motor-coaches carrying 230 per train and capable of 27km/h on steepest ascent.