This type of boiler was used on virtually all steam locomotives in the horizontal "locomotive" form. It is also typical of early marine applications and small vessels, such as the small riverboat used in the movie The African Queen. Marine units were often called "donkey boilers". Today, they find extensive use in the stationary engineering field, typically for low pressure steam use such as heating a building.

Another term you may here is the "package" boiler. This comes from the practice which evolved in the early to mid 20th century when the units were delivered to site with insulation, electrical panels, values and gauges already fitted. This was in contrast to earlier practice where little more than the pressure part was delivered and the ancillary components were fitted on site. 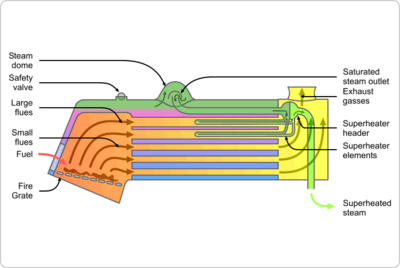 In the locomotive type boiler, fuel is burnt in a firebox to produce hot combustion gases. The firebox is surrounded by a cooling jacket of water connected to the long, cylindrical boiler tube. The hot gases are directed along a series of fire tubes, or flues, that penetrate the boiler and heat the water thereby generating saturated steam. The steam rises to the highest point of the boiler, the steam dome, where it is collected. The dome is the site of the regulator that controls the exit of steam from the boiler.

Draught for firetube boilers, particularly in marine applications, is usually provided by a tall smokestack. In all steam locomotives, since Stephenson's Rocket, additional draught was supplied by directing exhaust steam from the cylinders into the smokestack through a blastpipe, to provide a partial vacuum. Modern industrial boilers use fans to provide forced draughting of the boiler.

Another major advance in the Rocket was large numbers of small diameter firetubes instead of a single large flue (a multi-tubular boiler). This greatly increased the surface area for heat transfer, allowing steam to be produced at a much higher rate. Without this, steam locomotives could never have developed effectively as powerful prime movers.

Because the fire-tube boiler itself is the pressure vessel, it requires a number of safety features to prevent mechanical failure. Boiler explosion, which is a type of BLEVE (Boiling Liquid Expanding Vapor Explosion), can be devastating.

The fire-tube type boiler that was used in the Stanley Steamer automobile had several hundred tubes which were weaker than the outer shell of the boiler, making an explosion virtually impossible as the tubes would fail and leak long before the boiler exploded. In nearly 100 years since the Stanleys were first produced, no Stanley boiler has ever exploded.

An intensive schedule of maintenance is needed to keep a boiler in safe condition. A typical regime will involve regular external inspections (including the inside of the firebox), washouts (with an internal inspection), periodic detailed examination and a general overhaul.

The tube plates, the fusible plug and the heads of the firebox stays should be checked for leaks. The correct operation of the boiler fittings, especially the water gauges and water feed mechanisms, should be confirmed. Steam pressure should be raised to the level at which the safety valves lift and compared with the indication of the pressure gauge.

The working life of a locomotive boiler is considerably extended if it is spared from a constant cycle of cooling and heating. Historically, a locomotive would be kept “in steam” continuously for a period of about eight to ten days, and then allowed to cool sufficiently for a hot-water boiler washout. The schedule for express engines was based on mileage.[1] Today's preserved locomotives are not usually kept continuously in steam and the recommended washout interval is now fifteen to thirty days, but anything up to 180 days is possible. [2]

The process starts with a “blowdown” while some pressure remains in the boiler, then the draining away of all the boiler water through the “mudholes” at the base of the firebox and the removal of all the “washout plugs”. Scale is then jetted or scraped from the interior surfaces using a high pressure water jet and rods of soft metal, such as copper. Areas particularly susceptible to scale buildup, such as the firebox crown and narrow water spaces around the firebox, are given special attention. The inside of the boiler is inspected by sighting through the plug holes, with a particular check paid to the integrity of the firetubes, firebox crown and stays and absence of pitting or cracking of the boiler plates. The gauge glass cocks and tubes and fusible plug should be cleared of scale; if the core of the fusible plug shows signs of calcination the item should be replaced.

On reassembly care should be taken that the threaded plugs are replaced in their original holes: the tapers can vary as a result of rethreading. The mudhole door gaskets, if of asbestos, should be renewed but those made of lead may be reused; special instructions are in force for the disposal of these harmful materials.[2] At large maintenance facilities the boiler would have been both washed and refilled with very hot water from an external supply to bring the locomotive back to service more quickly.

Typically an annual inspection, this would require the removal and check of external fittings, such as the injectors, safety valves and pressure gauge. High-pressure copper pipework can suffer from work hardening in use and become dangerously brittle: it may be necessary to treat these by annealing before refitting. A hydraulic pressure test on the boiler and pipework may also be called for.

In the UK the specified maximum interval between full overhauls is ten years. To enable a full inspection the boiler is lifted from the locomotive frame and the lagging removed. All firetubes are removed for checking or replacement. All fittings are removed for overhaul. Before returning to use a qualified examiner will check the boiler’s fitness for service and issue a safety certificate valid for ten years.[2]

Rather old types of fire-tube boiler 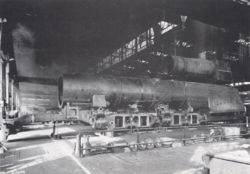 Continuing the water theme, not all shell boilers raise steam; some are designed specifically for heating pressurised water.

In homage to the Lancashire design, modern shell boilers can come with a twin furnace (aka twin flue) design. A more recent development has been the reverse flame design where the burner fires into a blind furnace and the combustion gasses double back on themselves. This generally results in a more compact design and can do away with a whole pass of tubes.