The word dreadful has several meanings:

In railfan parlance, dreadful means the complete opposite of the dictionary meaning – a term of pleasure and endearance towards a favourite locomotive . The expression 'dreadful, My Lordz' is a particularly emphatic way of expressing this.

As a term, 'dreadful' was and indeed is, especially used by Bashers . 'Bashing' evolved from trainspotting , and involves not just seeing locomotives , but travelling behind them ('haulage'). This could be as easy or difficult as the individual 'basher' wanted - some bashers were only interested in particular types of locomotives - some of which were rapidly facing withdrawal, and others were mostly dedicated to freight work, whilst others would be happy with whatever Class of locomotive was allocated to the train. When a locomotive had been 'scored' for haulage, it would often be noted in a book.

'Dreadful' can often be heard spoken (or shouted) by enthusiasts on seeing 'Clag', a term for particularly thick and black diesel exhaust. 'Thrash' is connected to 'Clag', being the sound of an engine being worked particularly hard. Some locomotives, especially Class 52 'Westerns' , Class 40 and Class 37's were and indeed are especially prone to this. Another term related to 'Clag' and 'Thrash', and of similar meaning to 'Dreadful', is 'Hellfire' 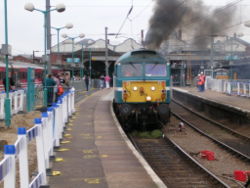