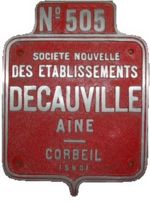 Name plate of the Decauville company

Paul Decauville (1846-1922) was a French pioneer in light railways. His major innovation was the use of ready-made sections of light, narrow gauge track fastened to steel sleepers; this track was portable and could be disassembled and transported very easily. The first Decauville railway used 400 mm (153⁄4 in) gauge; Decauville later refined his invention and switched to 500 mm (1 ft 73⁄4 in) and 600 mm (1 ft 111⁄2 in) gauge.

Starting in 1875, his company produced track elements, engines and cars. Those were exported to many countries, in particular to the colonial possessions of European powers. The French military became interested in the Decauville system as soon as 1888 and chose the 600 mm (1 ft 111⁄2 in) gauge track to equip its strongholds and to carry artillery pieces and ammunition during military campaigns. Decauville track was used during the French military expeditions to Madagascar and Morocco.

By the First World War, Decauville had become a military standard and the French and British eventually built thousands of miles of track. The German had a similar system, with normalized engines. 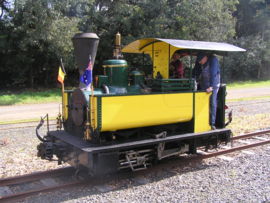 Preserved Decauville locomotive, built for the West Melbourne Gasworks in Australia and now on the Puffing Billy Railway.

Decauville tram installations for henequen plantations in the Mexican region of the Yucatan, were so extensive (approximately 4,500 kilometers of track), that the system became the de facto mass transit system for the region. Some ex-haciendas of the area still have small operating (usually burro powered) Decauville systems.