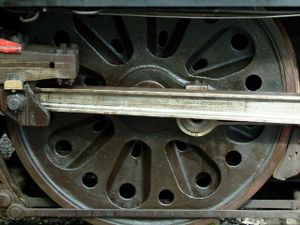 A Boxpok is a type of steam locomotive wheel where the wheel gains strength through being a number of box sections rather than having traditional solid spokes (the name is a variation on "box-spoke"). Being hollow, they allow better counterbalancing than conventional drivers, which is important for fast locomotives. The Boxpok wheel was patented by General Steel Castings Corporation of Granite City, Illinois.

The Bullied Firth Brown (BFB) wheels designed by Oliver Bullied and Firth Brown were a later variation though a separate patent where even lighter wheel was obtained by using a strengthened rim.

One of its major advantages is the more uniform support provided to the tyre over a spoked wheel.