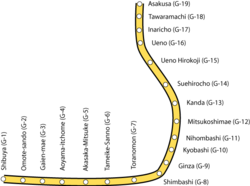 The Tokyo Metro Ginza Line (東京地下鉄銀座線, Tōkyō Chikatetsu Ginza-sen?) is a metro line in Tokyo, Japan, administered by the Tokyo Metro. It is 14.3 km long, and serves the wards of Shibuya, Minato, Chūō, Chiyoda and Taito.

On maps, its color is orange and its stations are denoted by the letter G followed by a number. Its planning line number is Line 3.

One of the original "Type 1000" trains operating on the Tokyo Underground Railway between Ueno and Asakusa. The last Type 1000 train was retired in 1968.

The Ginza Line began as the brainchild of a businessman named Noritsugu Hayakawa, who visited London in 1914, saw the London Underground and concluded that Tokyo needed its own underground railway. He founded the Tokyo Underground Railway Company in 1920, and began construction in 1925.

The portion between Ueno and Asakusa was completed on December 30, 1927 and publicized at the time as "the first underground railway in the Orient." Upon its opening, the line was so popular that waiting times to board for the 5-minute trip often exceeded 2 hours.

In January 1, 1930, the subway was extended by 1.7 km to Manseibashi Station, but this station was taken out of use on November 21, 1931 when the subway reached Kanda, 500 meters further down the line. The capital crunch resulting from Great Kanto Earthquake of 1923 slowed down construction, but the line finally reached its originally planned terminus of Shinbashi in on June 21, 1934.

In 1938, the Tokyo Rapid Railway, a company tied to the predecessor of today's Tokyu Corporation, began service between Shibuya and Toranomon, which was extended from Toranomon to Shinbashi in 1939. The two lines began through-service interoperation in 1939 and were formally merged as the Teito Rapid Transit Authority ("Eidan Subway") in July 1941.

During World War II, the subway was closed to civilians; even during the firebombings of Tokyo in 1945, civilians were not allowed to take refuge inside.

The "Ginza Line" name was applied in 1953 to distinguish the line from the new Marunouchi Line. In the postwar economic boom, the Ginza Line became increasingly crowded. The new Hanzomon Line began to relieve the Ginza Line's traffic in the 1980s; however, the Ginza Line remains one of Tokyo's most crowded due to its small train sizes and numerous major station stops.

Tameike-Sanno Station opened in 1997 to provide a connection to the new Namboku Line. 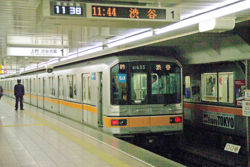 A train for Shibuya departs Asakusa Station on the Ginza Line.

The Ginza Line uses a total of 38 six-car "Eidan Type 01" EMUs with a maximum speed of 80 km/h. Each car is 16 m long and 2.6 m wide, with three doors on each side. Both the Ginza Line and the Marunouchi Line run on standard gauge (1435 mm) rails, while the other Tokyo Metro lines run on narrow gauge (1067 mm) rails.

Trains are stored and inspected at the Ueno Inspection Division (上野検車区, Ueno-kensha-ku?), a facility located northeast of Ueno Station with both above-ground and underground tracks. The facility is capable of holding up to 20 6-car trains. Major inspections are carried out at Tokyo Metro's Nakano facility by running individual trains through the Marunouchi Line over a connecting track near Akasaka-Mitsuke.

Almost all Ginza Line trains operate on the line's full length from Asakusa to Shibuya. However, two trains depart in the early morning from Toranomon, and some late-night trains from Shibuya are taken out of service at Ueno.

Being the oldest line, the Ginza Line is also the closest line to the surface, generally no more than one and a half stories underground. The western end of the line runs above ground, terminating at a third-story terminal in Shibuya.