The Surrey Iron Railway (SIR) was a 4 ft 2 in narrow gauge railway that linked Wandsworth in south London and Croydon in Surrey via Mitcham. It was constructed in the early years of the 19th century, opening on 26 July 1803. 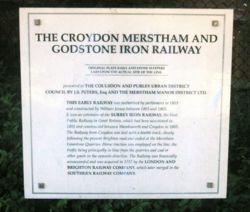 Short publicly subscribed plateways, like that to the Caldon Low quarries and the Little Eaton Gangway, had already been built. However, they were all part of canal projects. The original plan, first mooted in 1799 had been for a canal, but to take the necessary water from the streams in the area would have deprived the many water-powered mills and factories. This was the world's first railway to be publicly subscribed by Act of Parliament as a railway throughout.

It was horse-drawn, dedicated to goods.

The nine-mile route followed the shallow valley of the River Wandle, then heavily industrialised with numerous factories and mills, from the River Thames southwards to Croydon - a short branch ran from Mitcham to Hackbridge. The line was subsequently extended as the Croydon Merstham and Godstone Railway through Purley and Coulsdon to serve quarries near Godstone and Merstham, opened 1805, closed 1838.

William Jessop was chief engineer and the flat alignment of his route proved more long-lasting than the railway. The advent of faster and more powerful steam locomotives spelled the end for horse-drawn railways, and the SIR closed in 1846. Part of the route was reopened in 1855 by the Wimbledon & Croydon Railway, which was later absorbed by the London, Brighton and South Coast Railway. Much of the route remains in use by Croydon Tramlink.