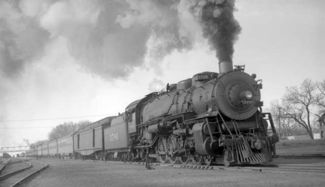 A view of the Atchison, Topeka and Santa Fe Railway's Train No. 1, The Scout, heading out of Belen, New Mexico on April 6, 1940.

"Drumhead" logos such as these often adorned the ends of observation cars on the Scout.

The Scout was one of the named passenger trains of the Atchison, Topeka and Santa Fe Railway. It was initially assigned train Nos. 1 (westbound) & 10 (eastbound), and its route ran from Chicago, Illinois to Los Angeles, California. Inaugurated on January 16, 1916, this "budget" heavyweight train consisted of tourist sleeping cars equipped with upper and lower berths, "chair" cars (coaches) for the truly cost-conscious, and an open-end observation car.

A map depicting the "Grand Canyon Route" of the Atchison, Topeka & Santa Fe Railway circa 1901.

Train No. 6, the Scout is led by Santa Fe #3442 as it passes through Syracuse, Kansas on September 11, 1931.
Retrieved from "http://train.spottingworld.com/wiki/index.php?title=Scout_(passenger_train)&oldid=2828"
Categories: