Réseau Guerlédan was a short-lived railway in Brittany which operated between 1978 and 1979. 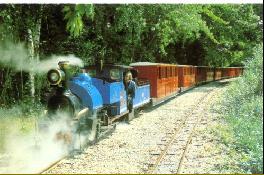 France, a model of an engine from the Darjeeling Himalayan Railway.

Four miles (6½ km) in length, laid to a gauge of 12¼ inches (311 mm), it ran along an abandoned metre gauge trackbed. Two new British steam locomotives, Jubilee and France, were designed for use on the line. The reason for the railway's closure seems to have been because of a disappointing season in 1979 and poor relations between the railway operator and local residents.

The locomotives and rolling stock were kept in storage until the Ellerton family purchased the Fairbourne Railway in North Wales in 1984 where they are still in use (but have been renamed Yeo and Sherpa).