Navan should not be confused with Navan Fort (Irish Emain Macha) in County Armagh.

Template:Infobox Irish Place Navan (An Uaimh in Irish, meaning "The Cave") is the administrative Capital of County Meath, Ireland. Situated on the N3 National Primary Road, it is the 9th largest and fastest growing town in Ireland according to Census 2002 statistics which state the population of the town increased by 51.6% since the 1996 Census. The capital of the county used to be Trim. The town is also home to Tara Mines, Europe's largest lead and zinc mine. The Roman Catholic Diocese of Meath seat was located in Navan until a backlash occurred against the Bishop of Meath, it is now located in Mullingar, County Westmeath.

The confluence of the River Blackwater (flowing south east from Virginia Lake and the famous River Boyne) occurs in Navan. Situated in the famous Boyne Valley the town is close to Brú na Bóinne (the Neolithic monuments of Newgrange, Knowth & Dowth), the Hill of Tara, Skryne and Slane, as well as the heritage towns of Kells and Trim. 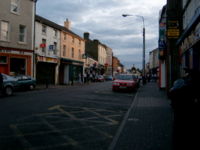 A street in Navan.

The town traditionally was famous for carpets (Navan Carpets closed in 2003) and for a thriving furniture industry (Beechmount Industrial estate). Both are now in decline, or have ceased, as a result of the move away from manufacture to cheaper locations like the Eastern Europe. Nevertheless, Navan has rapidly expanded with the Celtic Tiger to become a large dormitory town as it is only 50 kilometres (30 miles) from Ireland's capital city, Dublin.

Navan is also known for being the childhood home of Pierce Brosnan, the fifth actor to play the celebrated role of James Bond, for eleven years after his birth in neighbouring County Louth. TV personality Hector Ó hEochagáin, and comedians Dylan Moran and Tommy Tiernan also hail from Navan.

Other famous people included Sir Francis Beaufort famous for his wind scale. His birthplace was removed by the local council in the 1990s to make way for a road junction.

The best-known secondary school in Navan is St. Patrick's Classical School, a Roman Catholic boys' school. Navan also has two convent schools, including St. Michael's Loreto Secondary School, and Beaufort College, a large non-denominational vocational school. The town's Catholic boys' primary school is Scoil Muire which was originally run by the De La Salle Brothers, but they departed the town amid scandal in the early 1970s. Its past pupils included Pierce Brosnan. The town's only Church of Ireland school, Preston School, closed in the 1970s. 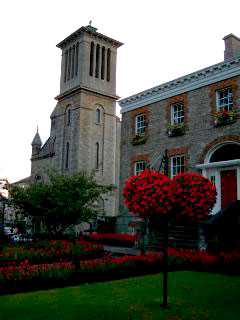 St. Mary's Church, formerly the cathedral.
The Parochial House is in the foreground.

The town has a freight only railway line. Navan was a railway crossroads, with the GNR(I) line from Drogheda to Oldcastle and the MGWR line from Kingscourt to Clonsilla (on the Dublin to Sligo line) passing through the town, connecting at Navan Junction.

As of 2005 the railway is solely used by Iarnród Éireann for freight for the local zinc mine Tara Mines to bring it to Dublin Port (View Photos of line). The line from Kingscourt was used for transport of gypsum until quite recently but now this line is unused.

A campaign to have the Clonsilla to Navan line reopened, Meath on Track seeks a commuter service to Dublin, initially via the existing Drogheda line, and then directly through reopening the direct line to Dublin via Dunboyne. The Transport 21 plan envisages the reopening of Clonsilla services happening in two stages, initially to a park and ride off the M3 at Pace by 2009 and later extending to Navan by 2015.