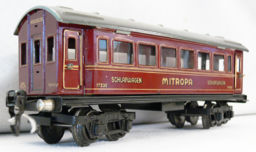 An O scale "Mitropa" sleeping car made by Märklin

Märklin (or Maerklin) is a German toy company, founded in 1859. Although it originally specialised in doll house accessories, today it is best known for model railways and technical toys. In some parts of Germany, the company's name is almost synonymous with model railroads. Recently, the third game in the Ticket to Ride board game series was named in their honour.

Märklin released its first wind-up train with cars that ran on expandable track in 1891, noting that railroad toys had the potential to follow the common practice of doll houses, in which the initial purchase would be enhanced and expanded with more accessories for years after the initial purchase. To this end, Märklin offered additional rolling stock and track with which to expand its boxed sets.

Märklin is responsible for the creation of virtually every popular model railroad gauge or scale, with only noteworthy exceptions being N scale and Wide gauge. In 1891, Märklin defined gauges 1-5 as standards for toy trains and presented them at the Leipzig Toy Fair. They soon became international standards. Märklin followed with O gauge (by some accounts as early as 1895 or as late as 1901), H0 scale in 1935, and the diminutive Z scale in 1972 — this is the smallest commercially available scale, 1:220.

Although Märklin is best known for its trains, from 1914 to 1999, the company produced mechanical construction sets similar to Meccano and Erector. Between 1967 and 1982, the company produced a slotcar system called Märklin Sprint. Märklin also produced numerous other toys over the years, including lithographed tinplate toy automobiles and boats.

On 11th May 2006, the company, which had until then been owned by the three families Märklin, Friz and Safft, was sold to the British investment group Kingsbridge Capital, with the support of the employees. The new shareholders plan to restructure the company and make it profitable again. The purchase price was approximately $38 million. At the time, Märklin had approximately $70.5 million in debt, as a result of several years of slumping sales.

The so-called Märklin system is Märklin's technique of using a third rail concealed in the roadbed with only small studs protruding through the ties of the track. The two outer rails are connected electrically. This provides the simplified wiring enjoyed by larger gauges — such as reverse loops — without seriously detracting from the realism of the track because only two of the rails are visible. Because the two outer rails are not electrically isolated from each other, however, some do not consider Märklin's system to be a true three-rail system.

The Märklin system has some incompatibility with other manufacturers' H0 trains. Because the wheels on Märklin's cars are not insulated, it causes shorts if its cars are used on other manufacturers' H0 track without modification. The profile of the wheels are also different (see also NEM 340). Additionally, for many years Märklin was the only brand that used AC for its H0 scale trains, although in the 60s Fleischmann, HAG, Röwa, Roco and others started producing trains for the Märklin system. Some people convert Märklin locomotives to DC for use on DC layouts, and by buying HAMO, Märklin had begun offering a line of DC locomotives as well, first under the name of HAMO and, after buying Trix, under that name.

Märklin System is the brand name for Märklin's new version of proprietary Märklin Digital train control system for H0-scale and 1-scale model trains introduced in 2004. Like Märklin Digital it is used for controlling trains and accessories digitally. The difference is that it has more available addresses, programmable decoders and a feedback-function from the mfx-decoders that helps the control unit identify the locomotives. 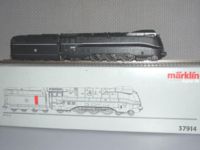 Märklin was among the first model railway companies to introduce a digital train control system. The Märklin Digital system was introduced in 1984 and jointly developed with Motorola. However, Marklin's system is not compatible with DCC (Digital Command Control), which was developed by a number of different people and companies and standardized by the National Model Railroad Association in the 1990s. Marklin offers DCC powered locomotives only for it's 2-rail DC Trix brand.

Over the years, the Märklin marque became valuable to model train collectors, some of the very early models fetching impressive prices on auction. In January 2005, the Märklin museum in Göppingen, Germany, was burglarised and more than 100 pieces, with an estimated value of more than 1 million Euros, were stolen. The items, which included one-of-a-kind prototypes along with pieces that dated back to 1891, were recovered in March 2005.[1]

The range of products is extensive, and collectors also pay attention to the packaging that were used for the products.

The Märklin toy company systematically included a print run number on almost all their printed material, including the boxes in which their products shipped. These print run numbers indicate the printer and also the month and year of printing. This is very useful for dating an item that is known to be associated with some printed material. The second group of digits indicates the catalogue number. The last set of numeric digits in the print run number indicates the month and year that the item was printed. The last group of letters identifies the printer.