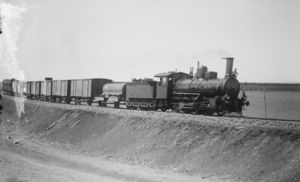 In the late 19th and early 20th centuries, the Ottoman Empire planned to construct a Baghdad Railway under German control. It became a source of international tensions but they were resolved in 1914 before the war began. The railway had little traffic but played a military role in the war.

The Berlin-Baghdad (and, ultimately, Basra) railway linkages would have enabled transport and trade from Germany through a port on the Persian Gulf, from which trade goods and supplies could be directly exchanged with the farthest of the German colonies, and the world. The run home to Germany would give German industry direct supply of oil. This access to resources, with trade unfettered from British control of shipping would have been beneficial to German economic interests [1].

The initial steps towards construction of a rail line from Constantinople (İstanbul) to Baghdad were taken in 1888 when a German syndicate headed by Deutsche Bank obtained a concession from Turkish leaders to extend the Haidar Pasha - Ismid (Haydarpaşa-İzmit) Railway to Angora (Ankara). After the line to Angora was completed in 1893, railway workshops were built in Eskişehir and permission was obtained to construct a railway line from Angora to Konia (Konya), and that line was completed in 1896. The two lines were the first two sections of the Baghdad Railway. Another railroad built at the same time by German engineers was the Hejaz railway, commissioned by Sultan Hamid II.

Other nations of Europe paid little attention to the building of the railway lines until 1903 when the Ottoman Government gave permission to an Ottoman corporation to build the railway line from Konia to Baghdad. This Baghdad Railway Company was controlled by a few German banks.

Consternation erupted in Russia, France, and Britain in 1903 as the implications of the German scheme to construct a great Berlin-Baghdad railway became apparent. A railway that would link Berlin to the Persian Gulf would provide Germany with a connection to her colonies in Africa, i.e. with German East Africa and German South-West Africa (present-day Tanzania and Namibia), unfettered from the British navy. German access to a Persian Gulf port could rival British shipping in trade from India. Even more threatening to British interests was the linkage of German industry to oil from Iraq.

Despite obstructions at the diplomatic level, work was begun on the railway, though without much speed. Both geographical and political obstacles prevented the completion of the Baghdad Railway before World War I commenced in 1914.

Role in origins of World War I

Although the railway issue was heated before 1914, historians agree that it was not a cause of World War I, because the main controversies (over financing) had been resolved before the war started. Thus, "Some of the optimism should be attributed to the willingness of the German government to compose long-standing differences. ...and in June 1914 a settlement was achieved over the Baghdad railway." [2] "Many economic and colonial issues which had been causing friction between French, German and British governments before 1914, such as the financing of the Berlin-Baghdad railway and the future disposition of the Portuguese colonies, had been resolved by the summer of 1914." [3]

By 1915 the railway ended some 50 miles east of Diarbakr (now called Diyarbakır). Another spur, heading east from Aleppo, ended at Nasibin (now called Nusaybin). Additionally some rail was laid starting in Baghdad reaching north to Tikrit and south to Kut. This left a gap of some 300 miles between the railroad lines. Additionally, there were three mountains which the railroad was going to go through, but the tunnels through these three mountains were not complete. So the railroad was, in actual fact, broken into four different sections at the start of the war. The total time to get from Istanbul to Baghdad during the war was 22 days (Esposito, Vincent (ed.) (1959). The West Point Atlas of American Wars - Vol. 2; map 53. Frederick Praeger Press). The total distance was 1,255 miles (2019 km).

The breaks in the railroad meant that the Ottoman government had significant difficulties in sending supplies and reinforcements to the Mesopotamian Front.

The fighting in Mesopotamia remained somewhat isolated from the rest of the war.

During the conflict, Turkish and German workers labored to complete the railway for military purposes but with limited manpower and so many more important things to spend money on, only two of the gaps were closed.

In 1919, the Treaty of Versailles cancelled all German rights to the Baghdad Railway. However, the Deutsche Bank transferred its holdings to a Swiss bank.

People in Turkey, Italy, France, and Britain reached several agreements which created various arrangements that gave a certain degree of control over the Baghdad Railway to various indistinct interests in those nations. Investors, speculators, and financiers were involved by 1923 in secretive and clandestine ways.

The British Army had completed the southeastern section from Baghdad to Basra, so that part was under British control. The French held negotiations to obtain some degree of control over the central portion of the railway, and Turkish interests controlled the oldest sections that had been constructed inside of Turkey but talks continued to be held after 1923. The American involvement in the Near East began in 1923 when Turkey approved the Chester concession, which aroused disapprovals from France and the UK.