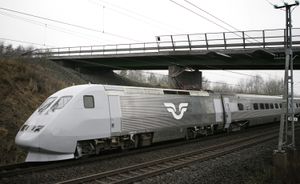 X2 is the high speed train system operated by SJ (Swedish Railways) under the X 2000 brand name. It has a top operating speed of 200–210 km/h, but has reached 276 km/h in a test. The reason the X2 was chosen was that the country has very curved railways, and not enough traffic to justify building special high-speed railway lines. Clearly, a tilting train like the X2 had to be developed. A tilting train provided the advantages of high speed and comfort for the passengers, as tilting trains are made for curved railways. The X2 was designed and built by ASEA, which later merged into Asea Brown Boveri and then Bombardier. The drive unit for the X2 is designated as a multiple unit although since the drive unit doesn't carry any passengers it should be considered as a locomotive.

Unlike the TGV, Thalys and other European high-speed trains, the X2, due to its tilting mechanism, does not run on specialised high-speed lines—it runs on existing lines like Pendolino used in Italy, Finland, Slovenia, Switzerland, and the United Kingdom. This limits the speed when compared to trains such as the TGV, but means that expensive high-speed lines do not have to be built.

The power output is 3200 kW, which is comparatively low for a fast train, though the tilting means that accelerating out of curves is not as important. It also enabled SJ to say that it does not consume more power at 200 km/h than older Rc-pulled trains at 130.

The X2 trains have mostly run the X2000 service level, but have periodically been used for Linx traffic as well as regional services, for which fewer coaches were used to improve acceleration.

X2 trains were loaned to Amtrak in 1992-93 and Countrylink in 1995 for evaluation, but neither company bought any trains.

An X2 train operates in China, on the Guangshen railway, known as "Xinshisu".