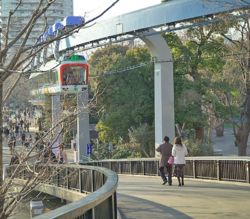 The Ueno Zoo Monorail carries passengers within the Ueno Zoo.

The Ueno Zoo Monorail Line (東京都交通局上野懸垂線, Tōkyō-to Kōtsū-kyoku Ueno Kensui-sen?) is a 0.3-km long suspended monorail operated by the Tokyo Metropolitan Bureau of Transportation. It lies within the Ueno Zoo in Taito Ward, Tokyo, Japan. The first monorail in the nation, it has two stations, double track, and operates at 600 V DC. The line began operating on December 17, 1958, and except for a suspension during 2001–2002, has been in operation since. Being located inside the zoo, it only operates on days when the zoo is open, and between 9:40 a.m. and 4:30 p.m.; departures are scheduled every seven minutes. The fare for the 90-second trip is 150 yen.