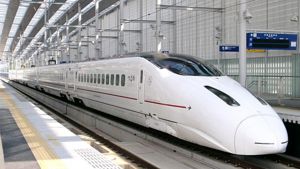 Tsubame is the initial service running on the Kyūshū Shinkansen since the line opened in March 2004. It employs the new 800 Series Shinkansen trains.

Prior to the opening of the Tsubame Shinkansen line, the name Tsubame was used for JR Kyūshū's limited express trains running on the Kagoshima main line, from Nishi Kagoshima Station (since renamed Kagoshima-Chūō Station) to Hakata Station in Fukuoka. These trains are still in use between Shin-Yatsuhiro station and Hakata (as "Relay Tsubame"). The Relay Tsubame will be retired when the Kyūshū Shinkansen is completed in 2010.

The Tsubame name was also used for the main Tōkaidō line express before electrification. These trains were pulled by C62 class 4-6-4 steam locomotives.