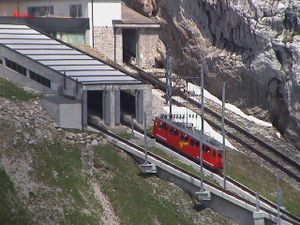 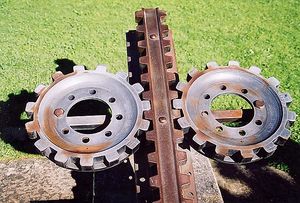 The Locher system rack and pinion 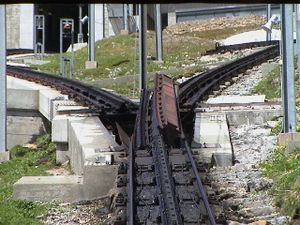 The Pilatus Railway or Pilatusbahn (PB) is a mountain railway in Switzerland and is the steepest cog railway in the world, with a maximum gradient of 48%. The line runs from Alpnachstad, on Lake Lucerne, to a terminus near the summit of Mount Pilatus at an altitude of 2132 m (6994ft). At Alpnachstad, the Pilatus Railway connects with steamers on Lake Lucerne and with trains on the Brünigbahn line of Swiss Federal Railways.

The line is 4.6 km (2.9 mi) long, climbs a vertical distance of 1629 m (5344ft), and has a rail gauge of 800 mm (2 ft 7½ in). The line was opened using steam traction in 1889. The maximum gradient of 48% meant that none of the then available rack designs were up to the job, and the line's engineer, Eduard Locher, developed a rack design specifically for this line. In the Locher system, the cog wheels on the train are mounted on vertical axles and their teeth engage with gear teeth cut in the sides, rather than the top, of the rack rail. Because of this system, there are no conventional points or switches on the line, only rotary switches (see photograph) and traversers.

The line was electrified in 1937, using an overhead electric supply of 1550 V volts dc.