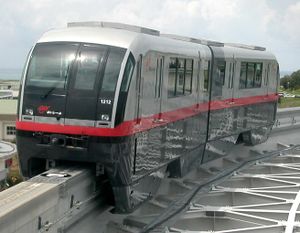 Okinawa Monorail at Akamine, the southern-most rail station in Japan

It comprises 15 stations, running from Naha Airport in the west to Shuri (near Shuri Castle) in the east, running through the heart of Naha.[1] The average distance between stations is 0.93 kilometers. It takes 27 minutes and costs ¥290 to traverse its entire length of 12.8 km.

It boasts including both the westernmost rail station in Japan (Naha Airport station) and the southernmost (Akamine station).

An extension of the monorail is currently in the planning process. There are three short routes being considered.