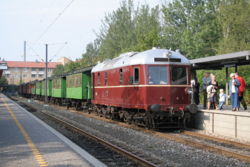 Nordsjællands Veterantog (NSJV) was founded as Helsingør Jernbaneklub in 1958 as a model railway club in Helsingør, Denmark. The club had its ups and downs in the early years, but the big turning point was when it was decided to try and work with scale 1:1. In 1968, the first service was operated and soon the club had turned into a heritage railway rather than a model railway club.

Acitivies soon grew and kept doing so steadily over the years. In 1992 it was decided to reorganise activities, essentially creating a foundation to take care of "business" issues. This foundation is the proper hold of the name Nordsjællands Veterantog, which translations into Heritage Railway of North Zealand. The club was responsible for the maintenance and operations, and this was renamed in 1995 to Nordsjællands Jernbaneklub (Railway Club of North Zealand) in order to match the name of the foundation.

NSJV has never owned their own tracks. Instead, services are operated on regular railway tracks used by operators such as DSB and Lokalbanen. Services run mostly in Northern Zealand, with scheduled services running on weekends and Wednesdays throughout the summer.

Currently, major projects are in the works to restore steam locomotives, one of which will hopefully be ready for service during 2006.