The Robert N. Broadbent Las Vegas Monorail is a mass transit system located in Las Vegas, Nevada, USA. It is owned and operated by the Las Vegas Monorail Company. For tax purposes, the Monorail is registered as a charity. Under Nevada law this is allowed since the Monorail provides a public service. The state of Nevada assisted in bond financing, but otherwise no public money was used in construction, and no future taxpayer obligation will be incurred. [5]

The Las Vegas Monorail project was built by Bombardier Transportation upon an existing free monorail that ran between the MGM Grand and Bally's, closing a long gap in the strip that tourists usually had to endure on foot.

After many delays, the finished Las Vegas Monorail opened to the public on July 15, 2004 with the completion and testing of "Phase 1".

During testing and commissioning, the monorail suffered several malfunctions that delayed the start of passenger service for almost a year. The most severe of these problems related to parts falling from the monorail to the ground under the tracks.

On September 8, 2004, more problems with falling parts led to the closing of the monorail for nearly four months. It reopened on December 24, 2004. A number of repairs were made to the monorail cars during this shutdown. Each time the monorail system requires major engineering changes, it must undergo a lengthy "commissioning" process to confirm the effectiveness and safety of the repairs. The local press reported that each day the monorail was down cost the system approximately $85,000, and that over $8.3 million was lost as a result of this one shutdown.

Transit Systems Management officials cited the good handling of crowds during the Consumer Electronics Show in January of 2005 as proof that the system can handle a major convention.

On February 2, 2005, the monorail system had to be shut down again due to problems with the electrical system. Reportedly, a short circuit required replacement of a 30-foot (9.14 m) section of the power rail. The system reopened about 12 hours later.

July 2005 set a record for ridership for the monorail, with over 1 million passengers. Bank West debuted a red "MoneyRail" branded train, and joins Nextel Communications (now a part of Sprint Nextel Corporation), Hansens Beverage, and Paramount Studios (with a Star Trek themed train) as corporate sponsors.

Expansion plans took a step forward on November 1, 2005, when the County Commission approved a study into the feasibility of an airport extension.

On June 6, 2006, it was announced by the Las Vegas Monorail Corporation that Las Vegas Monorail revenues rose nearly 16 percent from the previous year, to $3,250,565 in April 2006. Likewise, ridership had also increased, from 563,823 riders in January 2006 to 704,527 in April 2006. New ticket distribution and marketing efforts had been implemented to continue the trend, including a ticket brokerage program that provided conventioneers with monorail tickets in advance and a national public relations program. 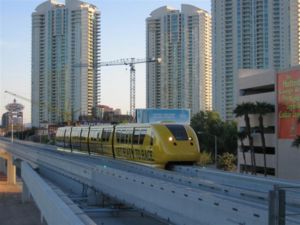 A monorail train arrives at the Sahara Station.

The present monorail (Phase 1 of the overall project) begins at the MGM Grand Hotel near the south end of The Strip, and runs roughly parallel to the Strip on its eastern side. The monorail passes next to the Las Vegas Hilton and the Convention Center, both with stations, before ending at the Sahara hotel at the north end of the Strip. The ride takes about 14 minutes to travel its total distance of 3.9 miles (about 6.3 km).

The monorail generally runs behind the eastern side hotels and casinos, a long block away from the Strip. To get to the Strip thus usually requires a long, confusing walk through one or more casinos, with the prospect of emerging upon the Strip in an unexpected location. This lack of a direct presence on the Strip along with relatively high ticket prices has been a factor in the rather slow acceptance of the monorail.

The Las Vegas Monorail operates from 7:00 a.m. until 2:00 a.m. (Monday-Thursday) or 3:00 am (Friday-Sunday) daily. A person can ride the system from end to end in as little as 14 minutes. A single ride costs $5.00 one-way, and $9.00 for a round trip ticket. A 24-hour unlimited travel pass can be purchased for $15.00, and a three-day unlimited travel pass can be purchased for $40.00. Tourists who are planning a trip to Las Vegas may purchase tickets in advance. Tickets may also be purchased from automated kiosks located inside the train stations. A map of the system is provided by the monorail operator.

It is named for Robert N. Broadbent, whom Las Vegas officials credit with gaining the support from the public and officials needed to bring the monorail to fruition. Broadbent, a former Boulder City mayor, Clark County commissioner, assistant secretary of the interior, and McCarran International Airport director, died in 2003, a few months before the system's scheduled opening.

The Las Vegas Monorail generates revenue not only from ticketed passengers, but also from corporate sponsors. Branding rights for the 7 stations and the 9 trains are available, and the sponsorship prices are in the millions. Hansens Beverage sponsored the first monorail train, featuring its Monster Energy Drink. Nextel Communications created a totally themed pavilion by branding the largest station, adjacent to the Las Vegas Convention Center. Since the Sprint-Nextel Merger in late 2005, Nextel Central has been rebranded as Sprint Central. 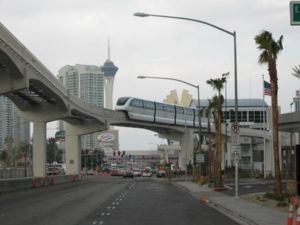 The monorail track was built by the Granite Corporation of California, one of the largest civil contractors in the United States.

The Las Vegas Monorail vehicles and signals systems were developed by Bombardier, which has been blamed for problems with the system. Bombardier also constructed the Mark VI monorail trains for Walt Disney World, as well as many other transit systems around the world. The company may be subject to litigation and liability for losses of income due to monorail malfunctions.

The technology for the monorail vehicles came directly from the well-tested and safe monorail train systems running in Walt Disney World. Having an independent non-profit corporation in charge of financing, maintaining and running the entire system was a relatively new idea with very few precedents. From the start, extremely high standards and great financial demands were set for what was a new, unproven management structure in the transit domain. The pressure to perform without losing money was great. It was expected that in addition to covering operating expenses and service of the debt, there would be surplus revenue that would be invested in expansion of the system. While still in the project stage, Las Vegas officials were warned by experts in mass transit that no major urban transportation system in the United States operates without significant public subsidies. As reported in the Washington Post, a spokesperson for the largest association of transit utilities in the United States noted that New York city's subway system recovers only 67% of its costs (through fares and advertising revenue), and it is the best performer in the US in that respect.

All stations in the system are available for branding by companies and groups. By selling branding rights for the stations, the system earns additional income to limit the fares paid by passengers.

and a station at

The monorail uses nine Bombardier MVI trains that have four cars in each of the fully automatic trains.

All trains in the system are available for branding by companies and groups. By selling branding rights for the trains, the system earns additional income to limit the fares paid by passengers. Branding income from the trains is much lower than the income received from the station branding. 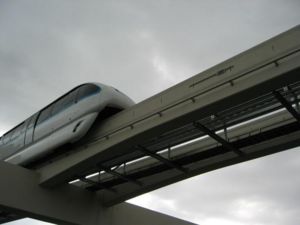 For "Phase 2", a 2.3 mile (3.7 km) extension to Golden Nugget Las Vegas and Downtown Las Vegas is planned, with new stations at the Stratosphere Hotel, Charleston Boulevard, World Market Center, and Golden Nugget Las Vegas. Construction was planned to begin in 2005 with service beginning in 2008. However, the anticipated funding from the federal government was not allocated in 2004, so the plans were put on hold. On January 27, 2005, the federal government announced that it will not provide money for the $400 million project.

The original plan was to open the system in January 2004, and for it to cover its debts and operating expenses by attracting 19 to 20 million riders. Since the system was not only delayed in opening, but later shut down for four months, income was not as great as organizers had hoped. This reportedly is a contributing factor for the government's denial of Phase 2 funding.

It is thus unclear if Phase 2 will ever be built. The Associated Press (AP) reported that Cam Walker, head of Transit Systems Management, the non-profit corporation charged with operating the monorail, said his company had no immediate plans to extend the monorail in any direction. The AP also reported that Las Vegas Mayor Oscar Goodman has been looking at cheaper, alternative funding for a light rail system or high tech buses.

Phase 3 was planned to extended the monorail system south from the MGM Grand Station underground to McCarran International Airport. Providing monorail service to the airport has been an unpopular idea with limosine and taxi operators in the city, as trips to and from the airport form a major portion of their business.[1] Several hotel and casino owners on the Strip continue to support the project, and are more supportive of an extension to the airport than one to downtown Las Vegas.[2] The airport extension may be built with private funds.

On August 28, 2006 the company announced that it is working on a revision of phase 3 that should be announced early in 2007. The plan would work with existing casino companies to add additional stations and connections to existing stations. The plan includes connections to all of the major convention centers and the airport. In addition the plan is expected to provide some connection to the three small monorails on the west side of the strip.[3]

At present, a feasibility study has been ordered to fit in with an upcoming expansion at McCarran Airport that would allow for an integrated station at the airport as part of the new terminal 3. The route starts at Terminal 3, with the first stop near Terminal 1, then north on Swenson stopping at the Thomas & Mack Center at UNLV, continuing up Swenson and East on Harmon with a stops at Hard Rock Hotel and Casino and the proposed W Hotel, then south on Koval turning East on Tropicana where it meets up with the existing system at the MGM Grand. This proposed route would be all overhead like the existing line and is proposed to be built with private funds.

On December 7, 2006, Clark County comissioners granted permission for the proposed extension to McCarran Airport. Funding has not yet been identified.[4]