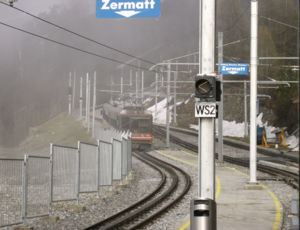 Gornergratbahn coming down the mountain near Riffelalp in May 2005.

The Gornergratbahn (GGB) is a 9 km long 1 m (3 ft 33⁄8 in) gauge mountain rack railway, with Abt rack system. It leads from Zermatt, Switzerland (1604 m), up to the Gornergrat (3089 m). The Gornergrat is a starting point for many hikes, as it lies surrounded by 29 peaks rising above 4,000 m in the Alps and several glaciers, including the Gorner Glacier (which is billed as the second longest glacier in the Alps). At the end of the line on Gornergrat, the Matterhorn is visible on a clear day. It is also a popular skiing area.

Work on the railway started in 1896, it opened in 1898 for summer only operation. Year round operation to the summit would follow in 1942. The upper terminal was remodeled in 2004. The Gornergratbahn has always been electrified. The entire line is 9,339 m in length, including 3,790 m of double track, and traverses an allitude difference of 1,469 m. The railway typically operates two-railcar units that can carry approximately 2,400 people per hour from Zermatt to the moutain summit. The railway is partnered with the Matterhorn-Gotthard-Bahn.

There are several stops on the line: