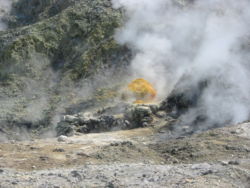 The Cumana Railway connects Naples by two separate routes (Cumana and Circumflegrea) with Torregaveta, near Cuma in the town of Bacoli (about 15 km west of Naples). It passes through Pozzuoli and the volcanic Campi Flegrei area. The line was built and run by the Società per le Ferrovie Napoletane (the Neapolitan Railway Company), founded in 1883, and is now operated by the S.E.P.S.A company.

The line was opened in 1889; one route follows the coast for about 20 km from the main terminal in the populous downtown area of Montesanto to Torregaveta via the stations of Corso Vittorio Emanuele, Fuorigrotta, Mostra, Bagnoli, Pozzuoli, Arco Felice, Baia and Fusaro. The second route also runs from Montesanto to Torregaveta via a northern course; the two lines form a closed ring that serves the whole Campi Flegrei area to the west of Naples.

The increasing traffic has made it necessary to double the track, beginning in 1975. The doubling of the Montesanto-Bagnoli (8.5 km) and Arco Felice-Torregaveta (5.9 km) sections have been completed and work on the remaining section (Bagnoli-Arco Felice (5.7 km) is well under way. The Cumana railway will become part of the Naples metro, and it will connect with Line 1 and the future Line 6 at the Mostra station in Fuorigrotta. In addition three street-level raiway crossings will be eliminated in the Bagnoli area.