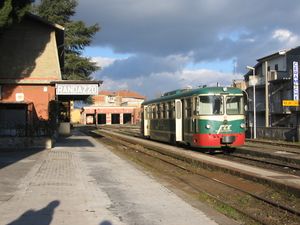 The Ferrovia Circumetnea (roughly translated as "Railway around the Etna") is a 950 mm (3 ft 1 in) gauge narrow-gauge regional railway line in Sicily. It was constructed from 1889 to 1895.

As the name suggests, the line (110 km in length) follows a route which almost encircles the Etna volcano. From its terminal in Catania the line starts off in a westward direction and loops around the Etna in a clockwise manner (as seen on a map), eventually reaching its other terminal at the seaside town of Riposto, approximately 28 km to the North/North-East of Catania.

The original terminal was at the Central Railway Station of Catania, directly on the sea front. In recent years however, the section from there to Catania Borgo (4 km in length) was upgraded to standard gauge and moved underground for most of its length for use as a new metro (Metropolitana di Catania). It was also extended by approximately 700m from the original terminus to the Porto station in the Port area of Catania. The terminal for the Circumetnea services was moved to Catania Borgo.

The Metropolitana and the Circumetnea are operated by the same company, which has its offices at Catania Borgo.

The rolling stock in operation is vintage and the route around the Etna is scenic.