For the bus, see Neoplan

The Electroliners were a pair of distinctive electric passenger train sets operated by the Chicago North Shore and Milwaukee Railroad, which ran between Chicago, Illinois, and Milwaukee, Wisconsin. These streamlined electric multiple unit interurban trains were built by St. Louis Car Company in 1941. Each train set carried two numbers, 801-802 and 803-804. Although the Electroliners were equipped with retractable couplers, they did not operate with other equipment, nor together.

Each trainset is made up of four sections: two end units and two center units. Each end unit is divided at the side doors into a Luxury Coach, which seats 30, and a Smoking Coach section, which seats 10 and also has a restroom. Each door had steps and a trap door for boarding from both street level and high-level platforms. One center unit is a coach unit that seats 40, and the other center unit is a Tavern Lounge which seats 26.

After the North Shore Line ceased operations in January 1963, the Electroliners were sold to the Philadelphia Suburban Transportation Company, also known as the Red Arrow Lines, and the two trainsets were renamed Liberty Liners. The trolley poles and steps were removed, new doors were added in the center sections, and updated third-rail contact shoes were installed in order to operate on the Philadelphia and Western Railroad right-of-way, which exclusively uses third rail and high-level platform stations between Upper Darby, Pennsylvania and Norristown. Electroliner 801-802 became Liberty Liner "Valley Forge", while 803-804 became "Independence Hall". The Liberty Liners were retired around 1976. 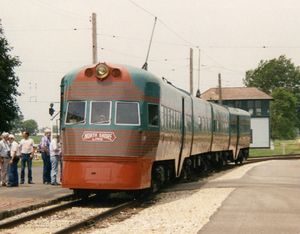 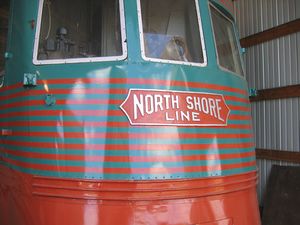 Closeup of the Electroliner front end at IRM

Electroliner 801-802 is preserved and is being restored to its early 1960s operating condition at the Illinois Railway Museum (IRM) in Union, Illinois.