Clapham Junction railway station is in Battersea in the London Borough of Wandsworth.

It is located at St John's Hill in the south west of Battersea, in an area now commonly known as Clapham Junction; a reflection of the influence the station has upon its locality. It is claimed to be the busiest railway station in Britain, and even in Europe.

All services to Waterloo (except Eurostar) and many services to Victoria and Croydon stations pass through the junction; these include South West Trains, Gatwick Express and Southern services. Services from Clapham Junction also head north along the West London Line, through West Brompton and Kensington (Olympia), on to Willesden Junction (Silverlink services) and Watford Junction (Southern services). 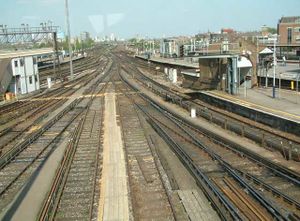 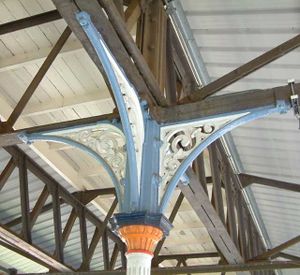 Electronic Information board on a Clapham Junction platform 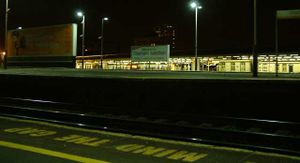 Clapham Junction platforms 2 to 10 at night 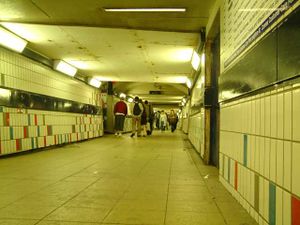 The subway at Clapham Junction at night 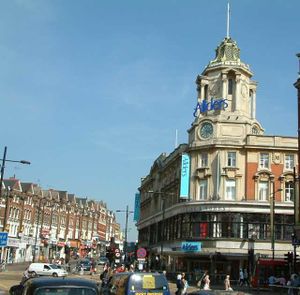 The station has 16 active platforms, numbered 2 to 17, and arranged in two groups. Platform 1, the northernmost platform, is no longer used, having no rails; Portakabins have been sited at the north-east end, and a Portakabin and power or signalling equipment housings at the south-west end. If the planned East London Line extension gets to Clapham Junction, it is possible that platform 1 would be used for the purpose. Platforms 2 to 6, on the Windsor lines, form a northern group oriented in a west-south-westerly direction, whilst platforms 7 to 17, on the South-Western and Brighton main lines, form a southern group oriented in a south-westerly direction and are separated from the northern group by a fan of a dozen or more sidings running into railway sheds to the west of the station.

The main entrance is from St. John's Hill, into a subway some 15 ft (4.6 m) wide running transversely beneath the eastern end of the 17 platforms, and on to a northern exit, which has restricted opening hours. The subway becomes very crowded during the morning and evening rush hours: ticket barriers at the end are a particular pinch point.

A covered footbridge connects the platforms at their western end. In contrast with the width of the subway, parts of the footbridge are vast, but unfortunately the footbridge does not provide entry to or exit from the station. Demands to reinstate the former footbridge entrance have, to date, fallen on deaf ears, despite the fact that it would alleviate the overcrowding and provide a potential taxi rank or bus station in what is currently an under-used car park.

In the recent past, in part because of the large number of platforms and trains, the station was confusing for those unfamiliar with it, who often found it difficult to establish from which platform a particular train would run. In 2003 a reasonably extensive system of electronic train information displays was installed at the entrance, in the subway and on platforms. In May 2004, the ticket machines were moved and reduced in number from six to four, only two of which take credit cards, and all of which are prone to frequent breakdown - this prompted a significant number of complaints from customers, leading to reinstallation of the two removed machines in winter 2004. There are seven staffed ticket kiosk windows, but purchasing tickets in the morning rush hour, and from time to time through the day, tends to involve a lengthy delay. In March 2005, work began to alter the layout of the travel centre and to install a set of eight new ticket machines; these were installed in April 2006. Only two of these machines accept cash payments; the excessive queueing times for these has also provoked complaints.

Clapham Junction has claimed to being the busiest railway station in the United Kingdom, and on 17 June 2005 changed its signage and claim, to be the busiest in Europe. Some 2,000 trains pass though it each day, the majority of which stop. Shinjuku Station in Tokyo is the world's busiest railway station in terms of passenger numbers, and sees far more trains than Clapham Junction.

The station is named Clapham Junction because it is close to the joining point of a number of major rail lines -- although the name is not shared by any junction in the locality of the station. The names of the nearby rail junctions are:

Prior to the railway age, the area was rural and specialised in the growing of lavender used in the production of perfume; the hill to the east of the station is called Lavender Hill. The coach road from London to Guildford passed slightly to the south of the location of the station, passing a public house called The Falcon at a crossroads in the valley between St. John's and Lavender Hill.

The 19th century saw the rapid development of the railway system. The first railway through the area was the London and Southampton Railway, opened in 1838. That railway terminated at Nine Elms, near Vauxhall, about 2 km (1 mile) to the north east of the Clapham Junction site, and made no provision for a station at the site of the (by now renamed) Falcon pub.

A second railway line, from Nine Elms to Richmond, opened in 1846, a third serving Vauxhall in 1848, and a fourth in 1860. Railways running through the area now served the centre of London, at Victoria and Waterloo; the affluent west of London - places like West Brompton and Earls Court; Watford Junction and connections north; Croydon, Crystal Palace and other parts of South London; Guildford, Richmond and places west; Southampton and places south-west; and Brighton and places south. This being the case, the London and South Western Railway determined to build an interchange station, choosing the Falcon crossroads and the point at which the Windsor lines and South-western main line separated from the Brighton line.

At the time of the construction of the station, Battersea was mostly associated with industry and poor working people. Clapham, a mile to the east of the site, was a longer-established and entirely more fashionable village and so the railway companies, which sought to attract a middle and upper class clientele, decided to adopt the grander of the two names.

The station precipitated the development of the area around it, with the population rising from 6,000 people in 1840 to 168,000 by 1910. In 1885 Arding and Hobbs Department Store was built, and after a 1909 fire was rebuilt to include the landmark cupola. Refurbishment rebranded the store with the parent company Allders name, but some of the original Arding and Hobbs signs were retained. Allders went into liquidation at the start of 2005 and Arding and Hobbs is now part of the Debenhams chain. The cupola is now illuminated at night in a rather fetching shade of blue.

On 11 November 1974 the owner of the "Pram Shop" at the station was found stabbed to death. The crime remains unsolved.

In 2005, Wandsworth Council deputy Labour group leader, Councillor Tony Belton, suggested that the station be renamed 'Battersea Junction', as the station is actually in Battersea, and quite a distance from Clapham[1].

Clapham Junction - or a point just slightly south-west of the station - was the scene of an horrific railway accident involving two collisions between three commuter trains on the morning of 12 December 1988. Thirty-five people died and more than 100 were injured.

The accident was caused by a signal relay wiring fault as a result of poor workmanship.

A signal was displaying an incorrect aspect. A driver noticed this error and stopped his train to report it, and the train behind ran through the faulty signal and collided with the rear of the stationary train. A fourth train managed to stop in time.