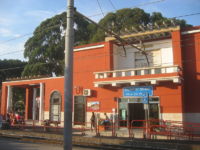 Pompei Scavi, a Circumvesuviana station by the ruins at Pompeii.

Circumvesuviana is a narrow-gauge railway connecting cities near Naples, Italy. Its tracks run around the base of Mt. Vesuvius, hence the name, though they do not in reality completely encircle it. There are 96 stations in total on the network, and 138 Km of track. The line uses the 950 mm gauge, and the maximum speed is 90 Km/h. Some trains stop at all stations on a particular route, others are 'fast' trains and stop at only the main stations.

The lines all start from the terminus in Naples, and then branch off in several places to towns on the Sorrentine peninsula, for which it forms an important commercial artery. The complete journey from Sorrento to Naples takes about one hour. Half-way along the line is the station at Pompeii Scavi, situated about 100 metres from the entrance to the excavations. There are also stops within reasonable walking distance - less than one kilometre - from the Roman city of Herculaneum and the Villa Poppaea (nearest station Torre Annunziata). Parts of the line are very scenic, particularly on the Sorrento peninsula, where the line passes through several tunnels and bridges. There is also a tunnel in Naples to allow the lines to pass under the mainline train station.

There are six lines. These can be summarized as:

At present, the network uses FE220 three-car units, usually coupled together to form a six- or nine-car train. These are painted white with red doors and ends.

Firema have been contracted to provide 26 new three-car articulated units, capable of carrying 450 passengers. As well as being more powerful, these will also have computer driving aids, self-levelling suspension and onboard toilets.