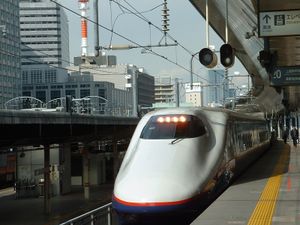 The Asama shinkansen as seen at Tokyo Station, Tokyo, Japan on March 13, 2005.

Asama (あさま) is the sole service running on the Hokuriku Shinkansen (Nagano Shinkansen). It began running in October 1997 for the Nagano Olympics. The only train type used on the line is the E2 Series, although one 200 Series train was modified to provide extra services on the line during the Olympics, and four E4 Series trains were specially built for seasonal use on the Nagano Shinkansen (only two are capable of travelling as far as Nagano).

From the start of the revised timetable in December 2005, Asama services were made entirely no-smoking.

The name was formerly used by the conventional limited-express services running between Ueno and Nagano.

Asama (浅間) in Japanese is the name of an active volcano (Mt. Asama) near Karuizawa on the boundary between Gunma and Nagano Prefecture.