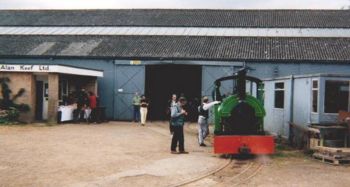 The Limited Company was formed in 1975 at Cote, Bampton, Oxon, continuing what Alan Keef had already been doing for some years as an individual. In 1986 the company moved to larger premises at Lea Line, Ross-on-Wye.

The first new loco was built in 1976. To date (2005) over seventy locos have been built; steam, diesel and electric. All have been narrow gauge except for two standard gauge steam locos for Beamish Museum - Steam Elephant and Puffing Billy.

In 1987 production of Motor Rail locomotives was taken over.