The Pennsylvania and New York Central Transportation Company, almost always called Penn Central, was an American railroad company that operated from 1968 until 1976. It was created by the merger on February 1, 1968 of the Pennsylvania Railroad and the New York Central Railroad. The New York, New Haven and Hartford Railroad was added to the merger at the insistence of the ICC on January 1, 1969. The headquarters of the merged railroad was in Philadelphia.

Background of the merger

The Penn Central was created as a response to challenges faced by all three railroads in the late 1960s. The northeastern quarter of the United States, these railroads' service area, was the most densely populated region of the U.S. While railroads elsewhere in North America drew a high percentage of their revenues from the long-distance shipment of commodities such as paper and iron ore, Northeastern railroads traditionally depended on a much more heterogeneous mix of services, including:

These labor-intensive, short-haul services were all vulnerable to the four-lane highway. In 1956, the U.S. Congress had passed, and President Eisenhower had signed, the Federal-Aid Highway Act of 1956.

Another significant problem was the inability of the New York Central and Pennsylvania railroads to respond to market conditions. The railroad industry at the time was heavily regulated by the Interstate Commerce Commission and was unable to change the rates it charged shippers and passengers. Therefore, reducing costs was the only way to become more profitable. Government regulation and agreements with labor unions tightly restricted what cost-cutting could take place. Merger seemed to be a promising way out.

The merged railroad: red lights ahead

As it turned out, the merged Penn Central was little better off than its constituent roads were before. A merger implementation plan was drawn up, but not carried out. Attempts to integrate operations, personnel and equipment were not very successful, due to clashing corporate cultures, incompatible computer systems and union contracts. Track condition deteriorated (some of the deteriorating track conditions were inherited from the three merged railroads) and trains had to be run at reduced speeds. This meant delayed shipments and personnel working a lot of overtime. As a result operating costs spiraled. Derailments and wrecks became frequent, particularly in the midwest.

Penn Central management created a holding company, the Penn Central Company, and tried to diversify the troubled firm into real estate and other non-railroad ventures, but in a slow economy these businesses performed little better than the railroad assets. In addition, these new subsidiaries diverted management attention away from the problems in the core business. To make matters worse, management insisted on paying dividends to shareholders to create the illusion of success. The company had to borrow more and more to keep operating. The interest on the loans became an unbearable financial burden.

The American financial system was seriously shocked when after only two years of operations, Penn Central declared bankruptcy on June 21, 1970. It was the largest corporate bankruptcy in American history up until that time.

During the bankruptcy: yellow lights

The Penn Central's bankruptcy was the final blow to long-haul private-sector passenger train service in the United States. The troubled line filed to abandon most of its remaining passenger rail service, causing a chain reaction among its fellow railroads. The federal government stepped in and, in 1971, created Amtrak, a virtual government agency, which began to operate a skeleton service on the tracks of Penn Central and other U.S. railroads.

The Penn Central continued to operate freight service under bankruptcy court protection. After private-sector reorganization efforts failed, Congress nationalized the Penn Central under the terms of the Railroad Revitalization and Regulatory Reform Act of 1976. The new law folded six northeastern railroads, the Penn Central and five smaller, failed rails, into the Consolidated Rail Corporation or Conrail. The act took effect on April 1, 1976. 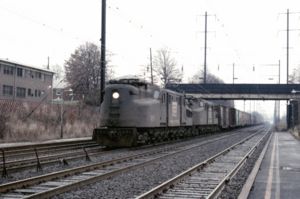 After the bankruptcy: yellow, then green

The deregulated Conrail had the muscle to implement the route reorganization and productivity improvements that the Penn Central had unsuccessfully tried to implement in 1968-1970. Many miles of old Pennsylvania and New York Central track were abandoned to adjacent landowners or rail trail use. A profitable Conrail was refloated on Wall Street in 1987, and operated as an independent, private-sector railroad in 1987-1999.

In 1999, CSX and the Norfolk Southern Railway jointly purchased Conrail on the open market and split up its mileage and other assets between them. The small portion of Conrail that represented trackage that was of interest to both CSX and Norfolk Southern was kept as the remaining Conrail system under the name "Conrail Shared Assets".

The holding company: 1976 and beyond

Meanwhile, the Penn Central Transportation Company had been merged into Conrail; but the holding company, the Penn Central Company, continued as a separate firm. In the 1970s and 1980s, the new Penn Central was a small conglomerate that largely consisted of the diversified sub-firms acquired by the old Penn Central before the crash. Among the properties the Penn Central Holding Company owned when Conrail was created in 1976 were Madison Square Garden (which stands above Penn Station), and its prime tenants, the New York Knickerbockers basketball team and New York Rangers hockey team.

Though the new Penn Central retained ownership of some rights of way and station properties connected with the railroads, it continued to liquidate these and eventually concentrated on one of its subsidiaries in the insurance business. The former Penn Central Corporation changed its name to American Premier Underwriters in March 1994. It is today part of the Cincinnati financial empire of Carl Lindner and his American Financial Group.

Although its subsidiary left the railroad business many years ago, American Financial Group, as of 2006, still owns Grand Central Terminal in New York City. The New York Metropolitan Transportation Authority is the station's current lessee. The cash value of the station is limited, as the building is listed for purposes of historic preservation and cannot, under current law, be torn down for redevelopment.

The old Pennsylvania Company, a holding company chartered in 1870 and reincorporated in 1958, remained through the merger.