The Bremgarten-Dietikon-Bahn (BD) is a privately-owned railway company in Switzerland. Its railway line connects Wohlen and Bremgarten in the canton of Aargau with Dietikon in the canton of Zurich. The line has been modernised and is part of the Zürich S-Bahn network. There is a half-hourly service frequency, increasing at peak times to quarter-hourly between Bremgarten and Dietikon. This line is very important for commuters to Zurich.

The route between Wohlen and Bremgarten West was built to standard gauge by the Aargauische Südbahn railway (Aarau - Wohlen - Rotkreuz). The service began on September 1, 1876, operated by steam locomotives. In 1882 the route was extended to include Brugg – Lenzburg – Wohlen – Bremgarten. On January 1 1902, the Swiss Federal Railways, SBB, took over.

The line to Wohlen had three disadvantages for Bremgarten: The timetable was poor, the station was too far away from the town centre and there was no direct connection to Zurich. In 1895 a plan was produced for an electrical tramway between Bremgarten and Dietikon. Construction began in 1901, and the route was opened on April 30, 1902.

Nevertheless there was still a gap of about a kilometre between Bremgarten and Bremgarten West where passengers had to make their own way. The BD entered into negotiations with the SBB, and in 1910, a permanent lease for the Wohlen-Bremgarten-Bahn began. The railway was electrified and an additional meter-gauge track was built between Wohlen and Bremgarten West. A railway bridge across the river Reuss was also constructed. Through-running trains between Wohlen and Dietikon began operating on February 8, 1912.

After 1950 the line was modernised to suburban railway standards using new rolling stock and facilities. The opening of the rapid-transit Zürich S-Bahn network on May 27 1990 caused major development. The route and timetable were integrated into the rapid-transit railway network, and three new stops with interchange facilities with other public transport modes were added. In 1995, a double-track section was built between Rudolfstetten Hofacker and Berikon-Widen, which was extended two years later to the Belveder stop. 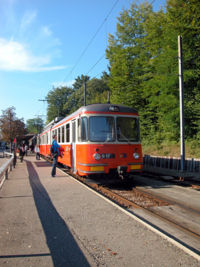 The line begins in Wohlen at a platform opposite the SBB station (altitude 426 m). After a few metres, the freight line joins; this produces a section of three-rail track (1000 mm for passenger trains, 1435 mm for freight trains). The line rises to 451 m altitude and passes into the Bremgarterwald (Bremgarten Forest). The Erdmannlistein stop lies in the middle in the forest and serves exclusively trip traffic. After 6.6 km is the Bremgarten West station (alt. 404 m), where the three-rail track for the standard-gauge freight trains ends.

Thus far the line is rather flat (maximum gradient of 1.5%), has gentle turning radii (minimum 300 m) and resembles a normal SBB standard-gauge line. After Bremgarten West, the line changes its character completely. After two sharp curves the line runs across the 156 m wide Reuss bridge. The company's headquarters, including a depot and administration building, are located at Bremgarten station (alt. 389 m).

From here on the line runs right alongside the main street through a densely populated area. The line rises up slopes of up to 5.6%. After four sharp curves one reaches the Berikon-Widen station on the Mutschellen pass (alt. 553 m). From now on the line goes downhill again. After a sharp left curve shortly before Rudolfstetten the downward gradient becomes gradually flatter. Between Bergfrieden and Dietikon the line has tramway-like characteristics with street-running. The line ends at Dietikon station (alt. 391 m) at a platform beside the SBB tracks.

For many years there has been a plan for a tunnel between Bergfrieden and Dietikon, in order to avoid the tramway-like section. However, in times of limited funds such a project (its practicality being extremely questionable) is probably not realisable.

More realistic is the project for a light rail system in the densely populated Limmattal area, west of Zurich. Continuing from the BD line the first stage would lead from Dietikon to Spreitenbach and Killwangen. The second stage would be from Dietikon through Urdorf and Schlieren to Zurich-Altstetten, with connection to the Zurich Tramway at the Farbhof terminus.